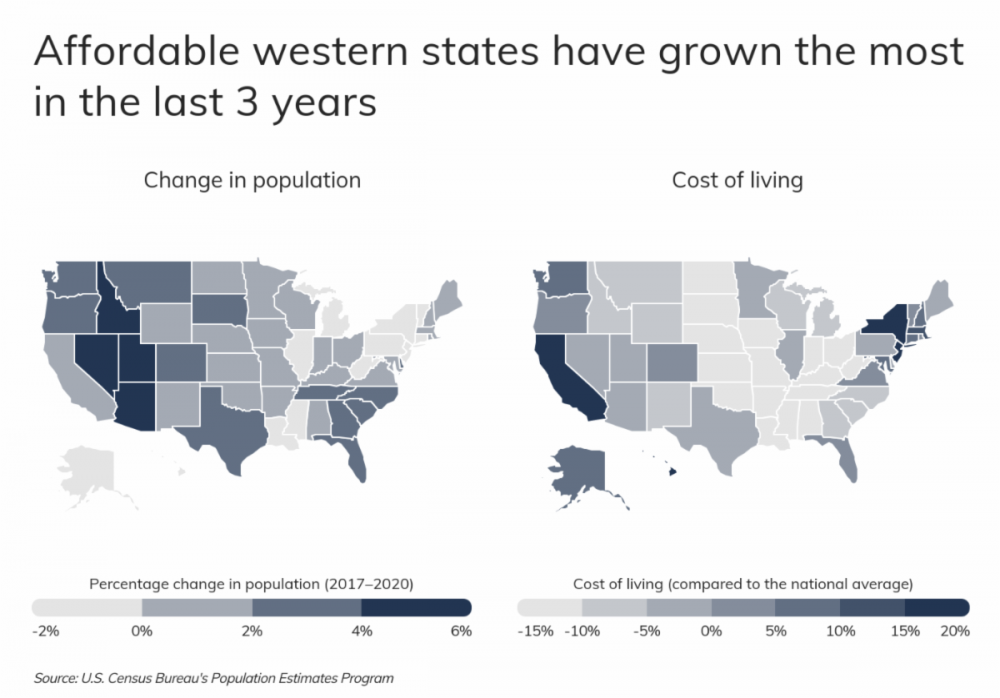 Between 2019 and 2020, nearly 29 million Americans moved to new residences within the U.S, nearly 40% of which moved to different counties or states. Rising costs of living in some cities are driving residents to more affordable locales. According to the U.S. Census Bureau, while the total U.S. population grew by 1.3% over the past three years, some places with below-average living costs grew by more than 10%.

Geographic mobility within the U.S. has been declining since 2012. Between 1984 and 1985, over 20% of Americans moved residences. By 2020, that figure had dropped to less than 10%. Moving of all kinds—within the same county, to a different county within the same state, and to another state—is trending downwards. Reasons for this decline include an aging population, high housing and moving costs, and the rise of dual-earner households, according to the Joint Center for Housing Studies of Harvard University. The COVID-19 pandemic temporarily halted many moves, but the trends towards remote work may spur more residents to change locations, particularly to more affordable areas.

While the total U.S. population grew by 1.3%—or about 4.4 million people—from 2017 to 2020, some cities and states experienced dramatic population growth. At the state level, Idaho and Nevada grew at the highest rates from 2017 to 2020, at 6.2% and 5.6% respectively. Both relatively low population and affordable states, Idaho gained about 107,000 residents while Nevada gained just over 166,000 during the three-year period. On the other hand, many states with above-average living costs like Hawaii, New York, New Jersey, and California saw their populations decline or stagnate over the same period.

The analysis found that the cost of living in Tennessee is 10.3% below the national average. Between 2017 and 2020, the population in Tennessee increased by 2.6%. Out of all affordable U.S. states, Tennessee experienced the 10th most population growth.

For more information, a detailed methodology, and complete results, you can find the original report on Roofstock’s website: https://learn.roofstock.com/blog/affordable-cities-most-population-growth