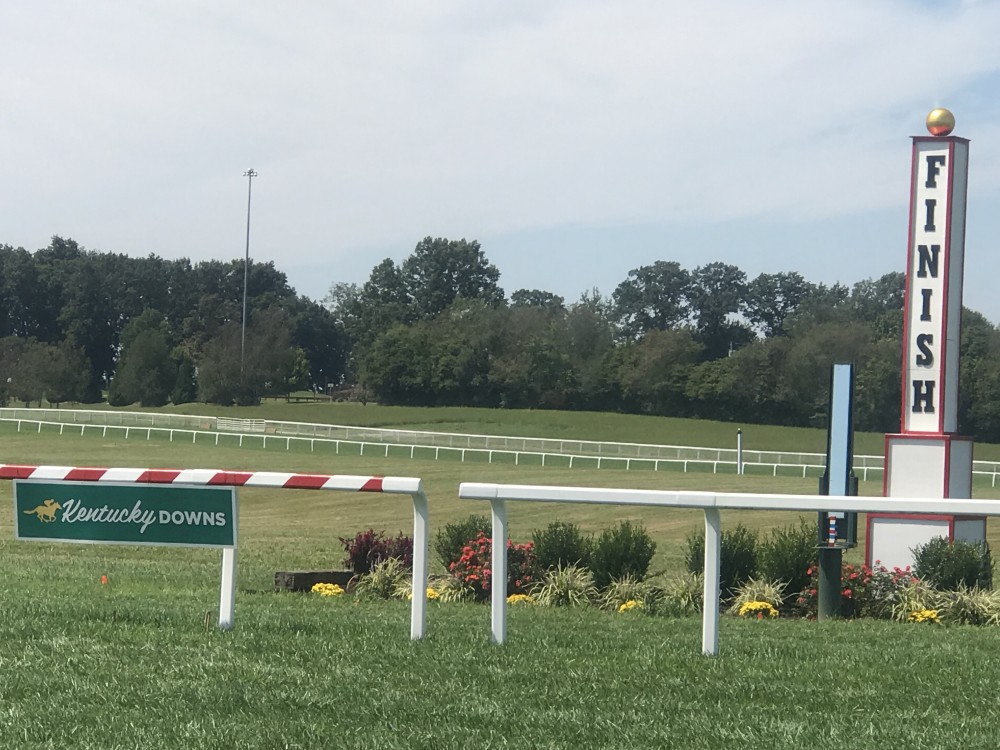 Stop the grinning and drop the linen, we are about to have live horse racing at Kentucky Downs.

The turf track located just north of the Tennessee state line will conduct it’s live racing meet beginning Sunday, September 5. Recent times have seen this European-style track enjoy a racing renaissance of epic proportion. Graded stakes races, Breeders’ Cup win and you’re in events, and a massive influx of entrants are all a part of the landscape now in Franklin, Kentucky.

The grass has become greener at Kentucky Downs over the past several years primarily due to that other green stuff…money. Historical horse racing gaming machines have infused lots of cash and that has led to the live racing boom. Offering the highest per race purses in the nation and second highest in the world, Kentucky Downs is the place to be in early September. Big money brings out the best horses, trainers, and jockeys.

“We always look forward to the Kentucky Downs racing festival”, says owner Jeff Bloom, who will be entering horses for the fourth consecutive year. “We love the location, the people, the quirkiness of the track, and of course the money. If you can knock down a race or two during the meet it can be a major benefit to your stable.”

Bloom will be entering two-time Kentucky Downs race winner Snapper Sinclair in one of two Stakes races yet to be determined. Boasting a record of two wins and a second at these Downs, Snapper has proven to be a horse for this course.

“Not all horses take to this track but mine have seemed to perform well here”, says Bloom. “For Snapper to be running here for the fourth straight year says a lot about how big a fan we are of Kentucky Downs.”

Owners Robert Falcone and Ron Winchell have infused money into the facility with improvements galore. Their commitment has been rewarded with growing interest from horsemen and other racing entities. The Breeders’ Cup has selected the Turf Cup and Turf Sprint as win and you’re in qualifying races. Over the six-day meet in 2021, there will be 16 Stakes races featuring a total of $10 million in purse money.

With live racing scheduled for September 5, 6, 8, 9, 11, and 12, lots of action will be packed into a short period. September 6 will feature the first graded stakes race as the WinStar Mint Million will be run at one mile with you guessed it, a purse of $1 million. The biggest day will be on September 11 as both the Breeders’ Cup qualifiers are to be contested with each of those also carrying a $1 million payout to the entrants. First post on each day is slated for 12:20pm.