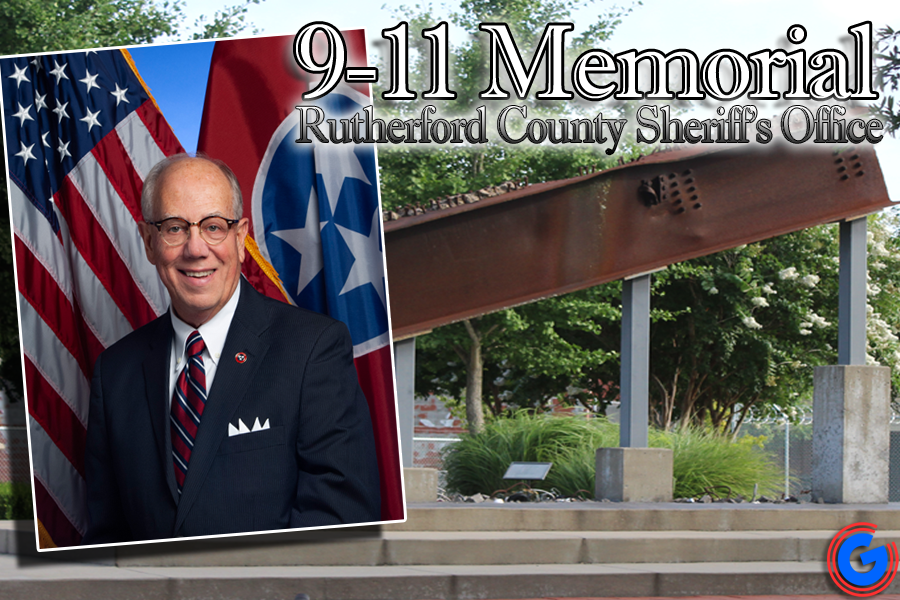 Above Left: Photo of keynote speaker, Commissioner Jeff Long of the Tennessee Department of Safety and Homeland Security. Above Background Photo: 9-11 Memorial in front of the RCSO in Murfreesboro featuring a 3,000 pound beam from the World Trade Center that points to New York City.

Commissioner Jeff Long of the Tennessee Department of Safety and Homeland Security will be the keynote speaker for the Rutherford County Sheriff’s 20th annual 9-11 Remembrance Ceremony Sept. 10.

People are invited to attend the event at 9 a.m. at the 9-11 Memorial at the sheriff’s office at 940 New Salem Highway, said Sheriff Mike Fitzhugh.

ADVERTISEMENT
“The 9-11 ceremony memorializes the lives of emergency responders, civilians and military who gave their lives responding to the terrorists’ attacks and who protected America’s freedoms,” Fitzhugh said. “We want to remember their sacrifices.”

Long served as Williamson County sheriff before being tapped by Gov. Bill Lee to lead the Department of Safety and Homeland Security two years ago.

He worked as an assistant district attorney and investigator for the 21st Judicial District and as Special Agent in Charge with the Tennessee Bureau of Investigation.

Long was named Tennessee Sheriff of the Year in 2013. He earned the Task Force Against Domestic Violence Law Enforcement Award and the John Marshall Inns of Court Award. He received a commendation from former FBI Director William S. Sessions.

Other highlights include performing patriotic songs by the Riverdale High School Singers, the posting of the POW/MIA flag by Rolling Thunder, ringing the bell in memory of the victims and military by Murfreesboro Fire Department, firing a 21-gun salute by the Honor Guard and playing “Taps” by bugler Robert Aanerud.

The ceremony will be held at the 9-11 Memorial featuring a 3,000 pound beam from the World Trade Center that points to New York City. The beam is secured by three columns to represent the firefighters, law enforcement officers and paramedics who gave their lives Sept. 11, 2001.