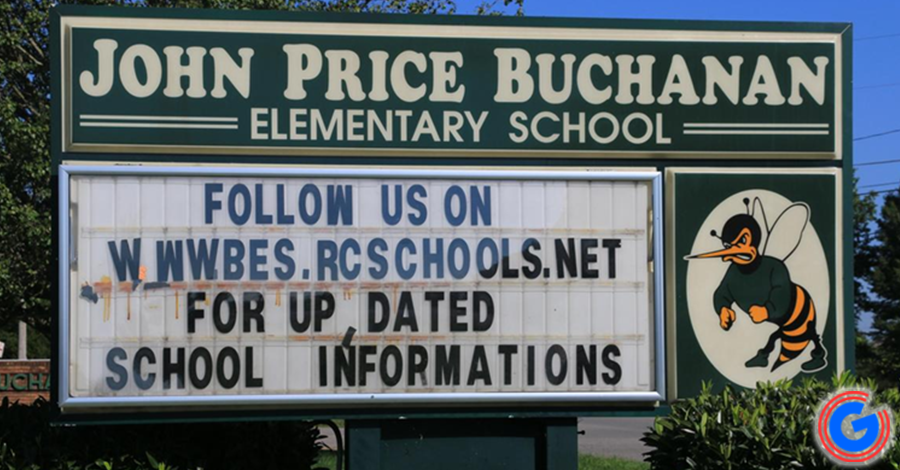 Buchanan Elementary’s original marquee along the Manchester Highway in Murfreesboro will be replaced with a new modern LED sign in the coming weeks. The above photo is the current sign that is in front of the school.

Thousands of students have attended Buchanan Elementary School since it opened in 1976.

One thing each one of them have in common is passing by the original Buchanan marquee that has been sitting alongside Manchester Highway.

Funding for the project, which was unanimously approved by the Rutherford County School Board in August, will include $20,000 from Wilson Bank & Trust along with another $5,000 from the Buchanan Elementary parent teacher organization.

When Director of Schools Bill Spurlock asked, “So, it is original,” principal Ashley Witt replied, “That is the best to my knowledge. I cannot find any records to give me any (information) other than that.”

LED Sign funding from Wilson Bank & Trust and the PTO

The sign needed repairs following a storm in spring 2000 when the plexiglass windows, which are hinged across the top of the sign, were ripped open by the wind and the school lost a lot of lettering from the message they had been displaying.

The damage was repaired, but each storm since has compromised its functionality.

A new LED marquee is in keeping with recent requests from other schools in the district.

Buchanan Elementary was named after the 28th Governor of Tennessee, John Price Buchanan (1847–1930), who served from 1891 to 1893. Buchanan is the only Rutherford County-born governor in the state’s history and lived two miles from the site of the school, which was built 46 years after his passing.