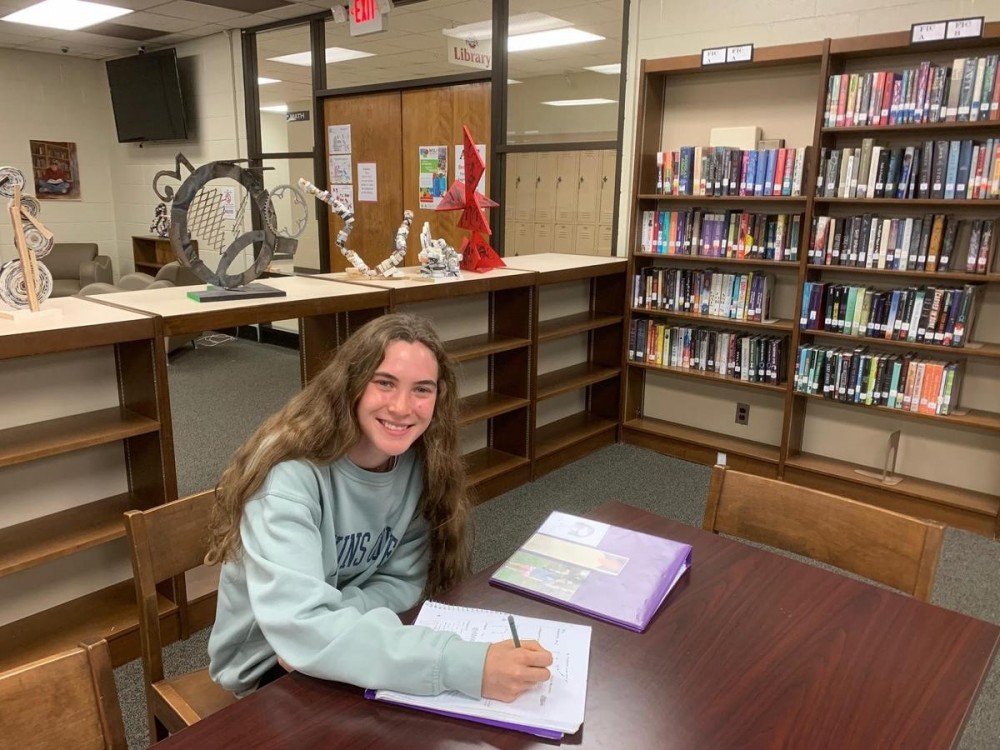 They are among the best and brightest students at the top high school in the state and, yet, being summoned to the principal’s office brought about a sense of anxiety and uneasiness.

Miles Lee was in English class when he was told Central Magnet Principal Dr. John Ash would like to see him in his office.

“My friends were kind of giving me a hard time about it,” Lee recalled. “They thought I was in trouble and, honestly, I did too. I didn’t know what was going on.

“I had never been called to the principal’s office before, so I was a little scared.”

Hope Clark was in macroeconomics when she “got pulled out of class to the office.” Clark, who hopes to attend either the University of Alabama or The College of William & Mary, was not sure why either.

“Honestly, you don’t know what you’re being called out for,” Clark said. “I thought maybe someone was coming to pick me up or there was some other class that needed me for something. It was really quite a shock just because I had no idea what to expect.”

Clark and Lee are among eight seniors from Central Magnet — Genevieve Bineza, Ava Burton, Miiriam Danielson, Logan Kelley, Douglas Thibodeauz and Micah Warren are the others — and 10 from Rutherford County who have been selected at National Merit Semifinalists. Oakland senior Beth Nelson was selected along with Grayson Lattanzi, a homeschool student who attended Stewarts Creek for the first semester as a freshman.

“One of the other Semifinalists was in there also being talked to and I kind of overheard a little bit of their conversation,” Clark admitted, “and that was when I really started to get really excited.”

“I had kind of been keeping up with when the results would come out or when the Semifinalists would be announced,” said Bineza, a senior from Central, “so I had a feeling.”

Lee added, “It turned out not to be a bad thing.”

The National Merit Scholarship Program is an academic competition for recognition and scholarships that began in 1955. Approximately 1.5 million high school students enter the program each year.

In early September, about 16,000 students, or approximately one-third of the 50,000 high-scorers, are notified that they have qualified as Semifinalists.

To ensure that academically talented young people from all parts of the United States are included in this talent pool, Semifinalists are designated on a state-representational basis. Semifinalists are the highest scoring entrants in each state.

“The students are in the upper 99th percentile of all students that took the test in America,” said Dr. John Ash, principal at Central Magnet. “That puts them in very exclusive company and is a great predicator for later success.”

Nelson is a second-generation Semifinalist.

Her mother, Dr. Antoinetter van Zelm, assistant director of the MTSU Center for Historic Preservation was a National Merit Semifinalist in the mid-1980s.

“It’s exciting,” said Nelson, who added, “I knew I had done well on the PSAT, but I didn’t know that I’d don that well and it’s very confusing how they determine if you’re a Semifinalist or not, just because the cutoff changes every year.”

In 2018, his older sister missed being named a Semifinalist by just one point and he still remembered the disappointment his sister felt.

“I just did not want to have to feel that same sort of thing,” said Lee, who would “sometimes look at my score and be like, ‘I’m pretty sure this is good enough, but I’m not entirely sure.’

“I was just really relieved, honestly, because usually you can look up the baseline scores in National Merit in your state, and mine was a little bit above what it normally is. So, I thought I could get National Merit, but just to be told was a nice relief because I’ve been stressing over it for a couple of months.”

“I felt like I might have been able to do it,” he said, “but it was nice to know that I actually did.”

Thibodeaux will likely major in biochemistry at Washington University in St. Louis, while Lee is leaning toward either Brown or Vanderbilt universities. Clack is looking at several universities, but said, “Alabama gives really, really good scholarships and it would allow me to continue in higher education without as much debt and possibly (receiving) some scholarships I wouldn’t have had the opportunity of being able to be selected for. That’s a really big factor” for being named National Merit Semifinalist.

She is making an official visit to Brown University this weekend and is also looking at Darmouth College, add being selected as a National Merit Semifinalist will help in the admissions process with either Ivy League school should she choose them over the Division III schools that have been recruiting her.

“I’m kind of juggling a couple of different things,” said Nelson, who will not make a final decision until after visiting all the campuses. However, the Oakland senior has decided on a major, “I’m leaning towards chemistry right now or possibly chemical engineering.”

Whatever any of them decide, they certainly have options.