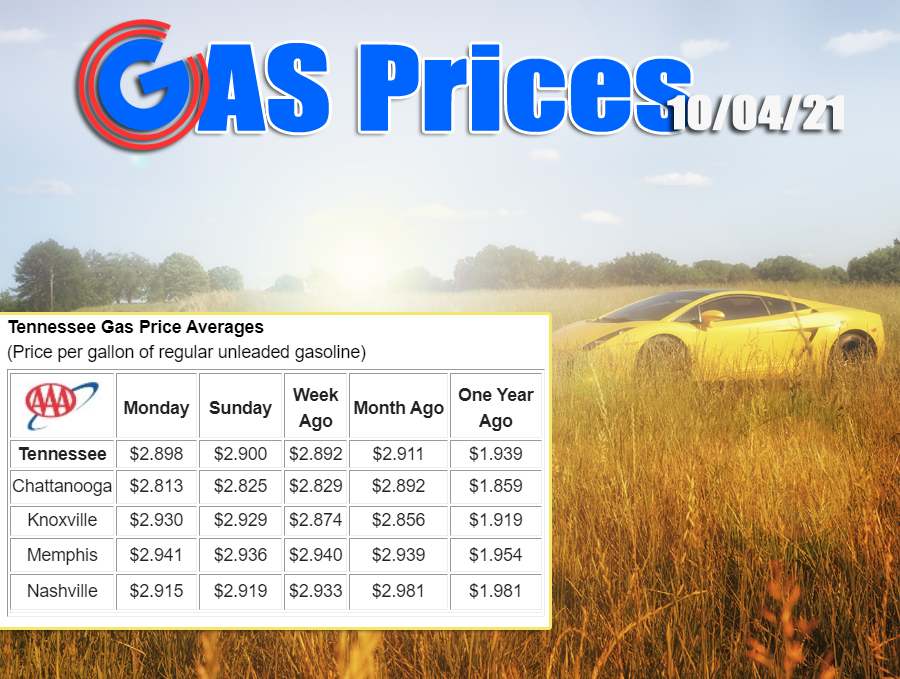 After holding steady for two weeks in a row, the Tennessee gas price average remains relatively unchanged this week with an increase of nearly a penny over last week. The Tennessee Gas Price average is now $2.90 which is a penny more expensive than one month ago and 96 cents more than one year ago.

“Global economic uncertainty and supply chain concerns caused by the lingering COVID-19 pandemic could be playing a role in keeping crude oil prices elevated,” said Megan Cooper, spokeswoman, AAA - The Auto Club Group. “But, there may be some relief on the horizon due to the news that OPEC and its allies might ramp up production increases faster than previously agreed.”

Continue reading about gas prices below...

Gas prices rose two cents to $3.20, a level not seen since October 2014. The probable causes for the increase are a slight uptick in demand and the high price of crude oil, which is stubbornly staying above $73 bbl.

According to new data from the Energy Information Administration (EIA), total domestic gasoline stocks increased slightly by 200,000 bbl to 221.8 million bbl last week. Gasoline demand also rose from 8.90 million b/d to 9.4 million b/d, more than a 5% increase. However, according to the EIA, oil and natural gas production was lower than pre-pandemic levels during the same quarter in 2019. This tightened supply is helping keep crude prices above $73 per barrel and preventing pump prices from taking their usual seasonal swoon.

Continue reading by scrolling down...

At the close of Friday’s formal trading session, WTI increased by 85 cents to settle at $75.88. Crude prices increased on the week due to a stronger dollar and despite EIA’s recent report showing that total domestic crude inventories increased by 4.5 million bbl to 418.5 million bbl. For this week, prices could decline if OPEC+, which comprises the Organization of the Petroleum Exporting Countries (OPEC), Russia and their allies, moves forward with an agreement to produce an additional 400,000 b/d in November. The collective previously decided in July to boost crude output by 400,000 b/d each month until at least April 2022 in a push to phase out 5.8 million b/d of existing production cuts. OPEC+ is meeting Monday via videoconference. The proposed increase would be in addition to the July boost.