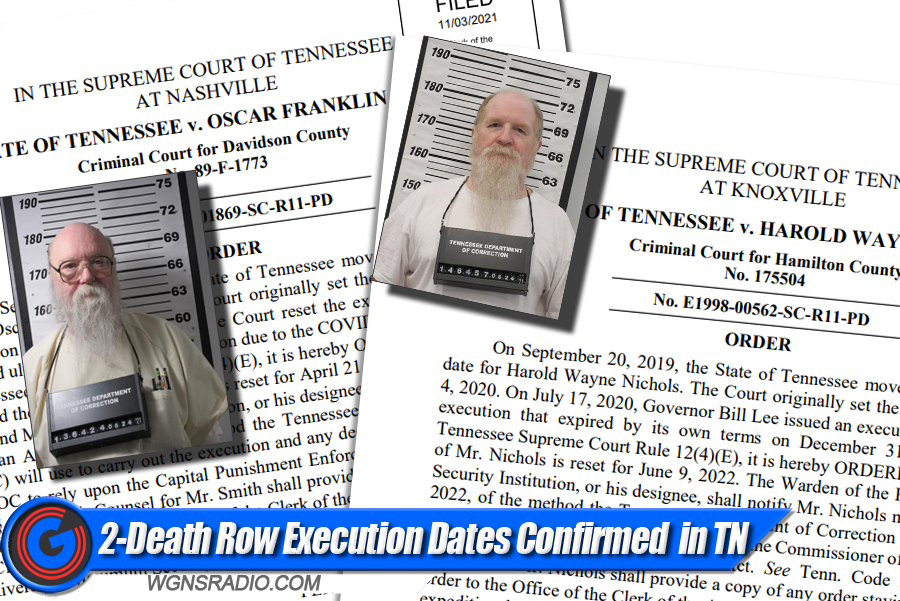 Two executions will take place for prisoners currently on death row in Tennessee, according to the Department of Corrections. The execution dates were announced and confirmed on Thursday (11/04/21) by the Tennessee Supreme Court.

The Court set an execution date of April 21, 2022, for Oscar Franklin Smith, convicted of the murder of three family members in Nashville in 1989.  The Court originally set the execution for June 4, 2020.

ADVERTISEMENT
Upon motions of Mr. Smith, the Court reset the execution for February 4, 2021, and ultimately stayed the execution due to the COVID-19 pandemic. The order that was confirmed on Thursday, lifts the stay.

The Court also set an execution date of June 9, 2022, for Harold Wayne Nichols, convicted of rape and murder in Chattanooga in 1988. The Court originally set the execution for August 4, 2020. On July 17, 2020, Governor Bill Lee issued an executive reprieve from the execution that expired by its own terms on December 31, 2020.

In 2016, WGNS’ Scott Walker spoke to a death row inmate who was housed in Nashville, Tennessee. In the interview, you will learn about an inmate who was ready to be put to death, but different groups stepped in to prevent the execution from moving forward.
Tags: Chattanooga death death row execution Harold Wayne Nichols life murder Murfreesboro Nashville Oscar Franklin Smith
Sections: News