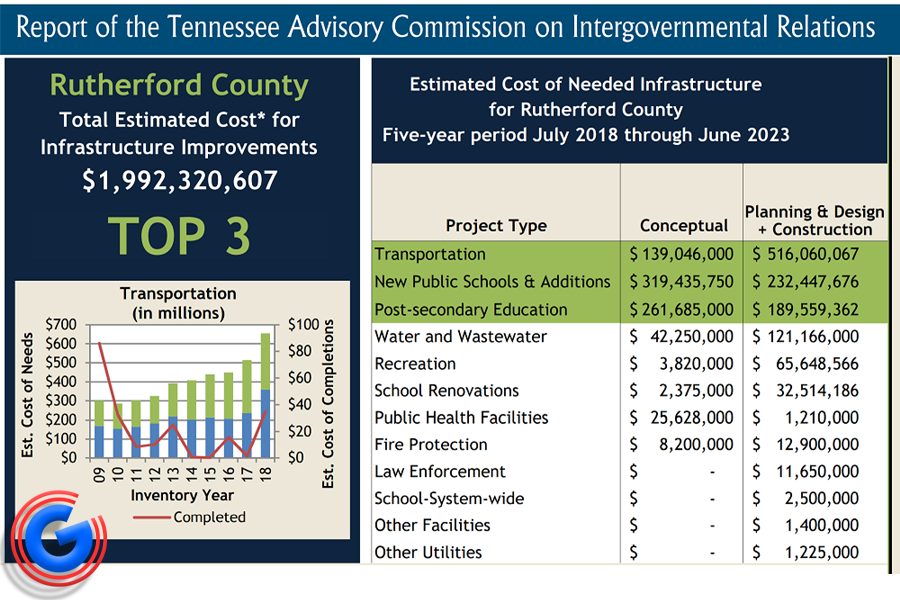 Above from the Tennessee Advisory Commission on Intergovernmental Relations

Over $26.5-billion will be funneled across the United States and spent on transportation projects over the next 5-years, according to the U.S. Department of Transportation.

Tennessee has 881 bridges in need of repair. According to the 2021 Infrastructure Report Card, "For example, driving on roads in need of repair in Tennessee costs each driver $209 per year, and 4.4% of bridges are rated structurally deficient."

Rutherford County is in the "Top 3" pier of areas in need of infrastructure improvements. A study released by the Tennessee Advisory Commission on Intergovernmental Relations (TACIR) in 2020 showed that Rutherford County has an outlined need of transportation projects that add up to over $516-million. The report covered a five-year period between 2018 and 2023.

The Roads and Bridges to be Repaired

Congress passed the Bipartisan Infrastructure Deal (Infrastructure Investment and Jobs Act) on November 6, 2021. When the deal was announced, The White House reported, "In the United States, 1 in 5 miles of highways and major roads, and 45,000 bridges, are in poor condition."