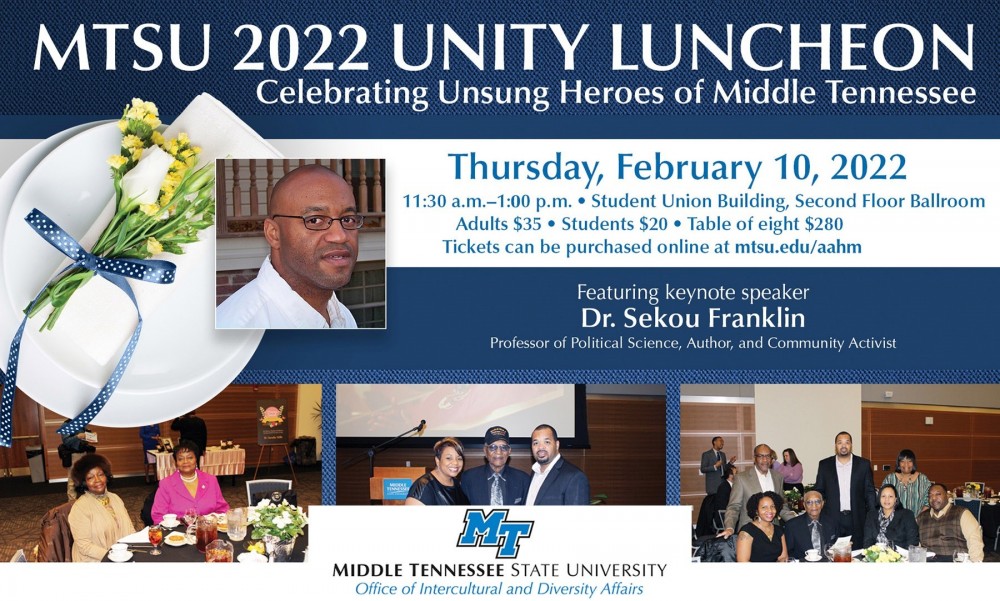 A traditional part of the university’s Black History Month events, the event returns this year to its traditional luncheon format on campus and is set for 11:30 a.m. to 1 p.m. Thursday, Feb. 10, in the MTSU Student Union Ballroom, Second Floor, 1768 MTSU Blvd. Last year’s celebration was held virtually because of the pandemic.

ADVERTISEMENT
Keeping its familiar theme of “Where There Is Unity, There Is Strength,” the luncheon will feature keynote speaker Sekou Franklin, Ph.D., MTSU professor of political science and international relations and currently president of the National Conference of Black Political Scientists.

A published scholar and author, Franklin’s latest book, “Losing Power: African Americans and Racial Polarization in Tennessee Politics,” was co-authored with Ray Block, Ph.D., associate professor of political science and African American studies at Penn State University. Franklin is also the author of “After the Rebellion: Black Youth, Social Movement Activism, and the Post-Civil Rights Generation” and edited the “State of Blacks in Middle Tennessee.”

This year’s Unity Luncheon honorees and their categories of recognition include:

Tickets are available online only until Thursday, Feb. 3. Cost is $20 for students and $35 for nonstudents. A table of eight is available for $280. Purchase tickets at https://bit.ly/mtunity22.

The Unity celebration is a tradition that has been around since 1996 to honor “unsung heroes” across the Midstate age 60 or older who have lived in the area for two decades or more and have made outstanding contributions to their community. Almost 130 residents have been recognition since its inception.

“MTSU is always honored to recognize those citizens across the region who’ve given so much of themselves — often quietly and without fanfare — to make their communities and the lives of their neighbors and colleagues better,” said Daniel Green, director of the Office of Intercultural and Diversity Affairs and chair of the Black History Month Committee.