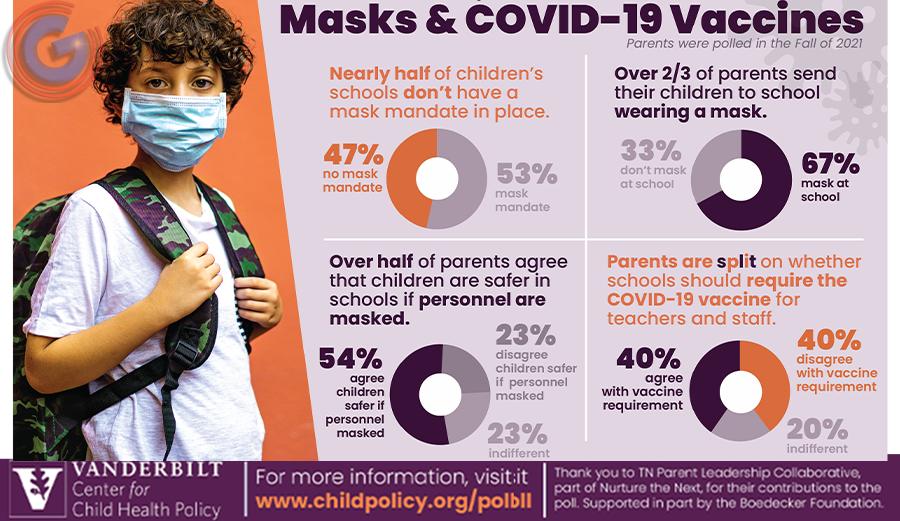 Most Tennessee parents polled late in 2021 by researchers with the Vanderbilt Center for Child Health Policy say they send their children to school with masks, but they also have different opinions by both region and race and ethnicity on protective measures against COVID-19 in schools.

The latest analysis of the annual Vanderbilt Child Health Poll found that about 67% percent of 1,026 parents polled said their kids attend school with a mask on, and 53% said their child’s school has a mask requirement.

ADVERTISEMENT
This latest analysis looks at virus prevention efforts in schools, specifically masking and vaccines, both of which have been shown to reduce spread and the severity of disease in those who do become infected. The poll was conducted in late fall 2021, before the rise of the Omicron variant in Tennessee and revisions to prevention measures at some schools.

“Everyone wants kids to be as safe as possible when they are at school,” said Dr. Joe Zickafoose, a pediatrician at Monroe Carell Jr. Children’s Hospital at Vanderbilt and a leading researcher on the Child Health Poll. “As a parent, I’m interested in keeping my children healthy and in school. As a pediatrician, I’m interested in keeping my patients safe from a preventable disease, especially those children with severe or chronic conditions that put them at risk for hospitalization or even death from COVID-19.”

“Regardless of where we live in Tennessee, it’s important for everyone to remember and recognize that every school has at least a few children with underlying conditions that put them at high risk of severe COVID-19, and we know that it takes multiple prevention efforts to keep them safe in school,” Zickafoose said. “While leaders need to take these differences of opinion into account, the guiding principle in setting school policies should be the wellbeing of all children.”

The Vanderbilt Child Health Poll is conducted annually to gauge parents’ concerns about a wide range of topics. The data, collected from a representative sample of Tennessee parents across each of the three grand divisions of the state on top issues from education and schooling to COVID, cyberbullying, food security, insurance status, mental health and others will be released weekly over the next 10-12 weeks.

The research was funded in part by a grant from the Boedecker Foundation.

The Vanderbilt Child Health Poll sought to oversample non-White parents to gauge differences in child health concerns and priorities by race. Our sample size was large enough to draw conclusions on differing responses between Black and White parents, but the number of respondents from other racial/ethnic groups was too small to yield statistically significant results. Focusing on health equity and the racial disparities that effect families across the state of Tennessee remain top priorities for the Child Health Poll.