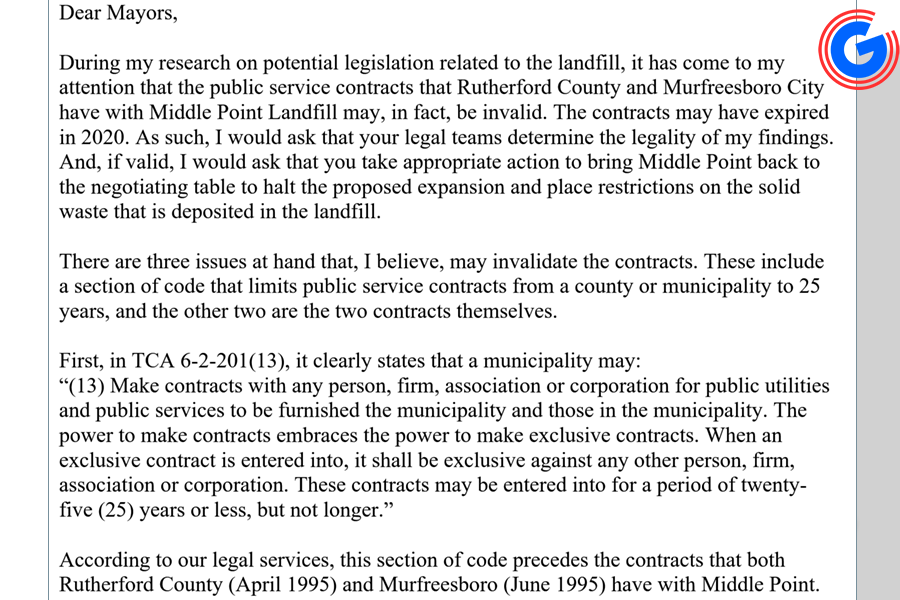 He has asked that their attorneys investigate these potential conflicts to determine if these contracts have expired.  Middle Point Landfill, owned by Scottsdale, Ariz. based Republic Services, could be operating without a valid public service contract, Terry said.

ADVERTISEMENT
“Through extensive research and multiple meetings with the Tennessee Department of Environment and Conservation (TDEC), Gov. Bill Lee and his staff, and legal experts, I have discovered sections of our code that grant certain authority for cities and counties to negotiate contracts for public services.  However, the code specifically limits those contracts to 25 years,” Terry said.  “The public service contracts held by our city and county with Middle Point Landfill were executed in 1995.  If it is determined that these codes can be applied to these contracts, then these contracts expired two years ago in 2020.”

Rutherford County signed a host agreement with Middle Point Landfill in 1995.  According to the agreement, Rutherford County agreed not to interfere with daily operations of the landfill, including not restricting the tonnage, type, or point of origin of solid waste that is deposited in the landfill in exchange for free county waste disposal and a host fee that has not increased since 2001.

Thirty-four counties are dumping their solid waste in Rutherford County, according to a 2019 report by Republic Services. Citizens and local leaders believe the landfill is negatively impacting the quality of life, property values, and infrastructure in the community.

Because there is not a termination date on the contract, it has been believed that the contract could go on in perpetuity particularly, if the landfill expansion proposal is successful.  Terry believes there is a clause in the contract that subjects the contract to the 25-year expiration date in Tennessee Code.

“The contract clearly states that the landfill ‘will comply with all applicable federal, state, and local laws now in effect and hereinafter be adopted and become effective during the term of this agreement.’  The section of Tennessee Code Annotated that limits this contract to 25 years was enacted one month after the contract was signed,” said Terry.  “I believe that code is applicable to the contract which means Rutherford County should be able to prevent the expansion and restore control over what gets dumped on our community.”

The city public service contract with Middle Point was signed in 1995 and there is a similar section of code for municipalities, like Murfreesboro, that restricts these kinds of contracts to 25 years.   If this, in fact, applies to Murfreesboro’s contract, then this could impact any expansion possibility of the landfill, Terry said.

“I’m not an attorney, but I do believe that this issue needs to be investigated to determine the impact of our code on these contracts.  If Middle Point does not have a valid public service contract with our community, then talks of expansion or continued dumping on our community needs to halt immediately,” Terry said.