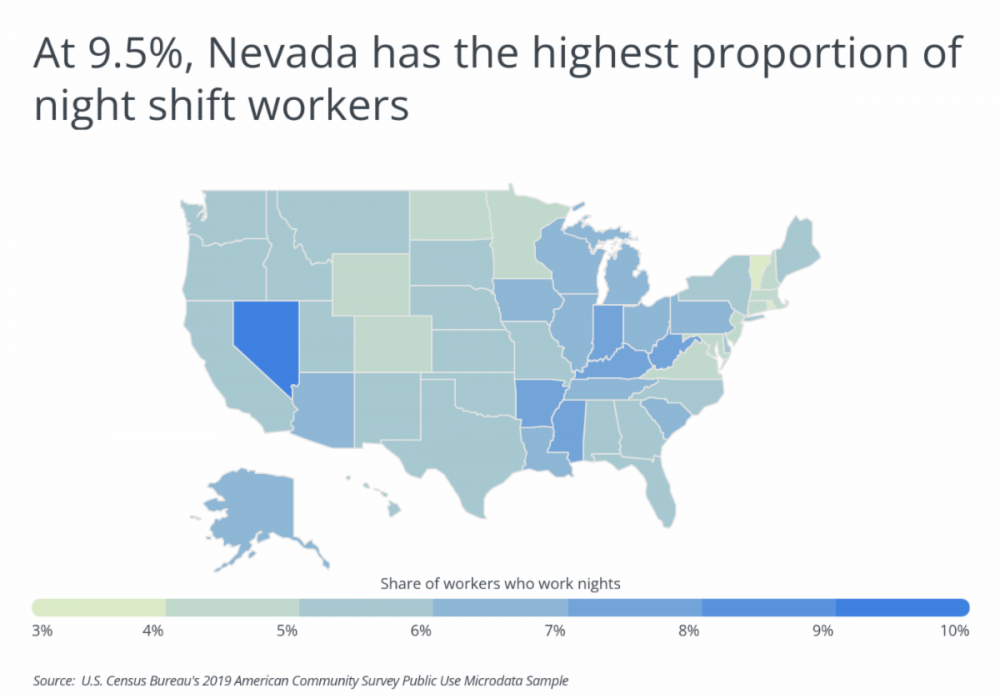 A recently released report found that 217,948 Tennessee workers, or 6.8% of the state’s total workforce - work night shifts. When looking across the entire country, Tennessee had the 8th largest percentage of workers who work the night shift.

Over nine million Americans, or about 6% of all workers, work night shifts regularly, according to data from the U.S. Census Bureau. These workers are vulnerable to unique risks associated with night shifts, including sleepiness on the job, fatigue, as well as a variety of health issues. Night shifts are much more common in certain occupations, most of which tend to be lower paying jobs. As a result, night shift workers tend to earn less than other workers despite the added risks.

The risks associated with night shift work include both the direct impacts of abnormal sleep schedules, such as drowsiness while driving home, reduced attention and productivity, and sleep disorders, as well as other health risks—heart disease, metabolic disorders, and cancer. Recent research from the National Toxicology Program finds that disruptions to our natural circadian rhythms, caused by working at night, can hurt the biologic systems that help prevent cancer. Workers who regularly work nights are most at risk, especially those who work at least three hours between midnight and 5:00am and do so for 10 years or more. While most occupations are conducive to regular, daytime work schedules, it is common in some jobs to work nights.

Scroll down to continue reading and to see Tennessee specific numbers…

Working on the night shift… Continued…

To determine the states with the most night shift workers, researchers at Porch analyzed data from the U.S. Census Bureau. States were ranked by the percentage of workers who work nights, defined as those workers who arrive at work between 5:00pm and 3:59am. Researchers also calculated the total number of workers who work nights, the median annual wage for night workers, and the median annual wage for all workers.

The analysis found that 217,948 Tennessee workers—6.8% of the state’s total workforce—work night shifts. Out of all U.S. states, Tennessee has the 8th largest share of night shift workers.

For more information, a detailed methodology, and complete results, you can find the original report on Porch’s website: https://www.porch.com/advice/night-shift-workers/