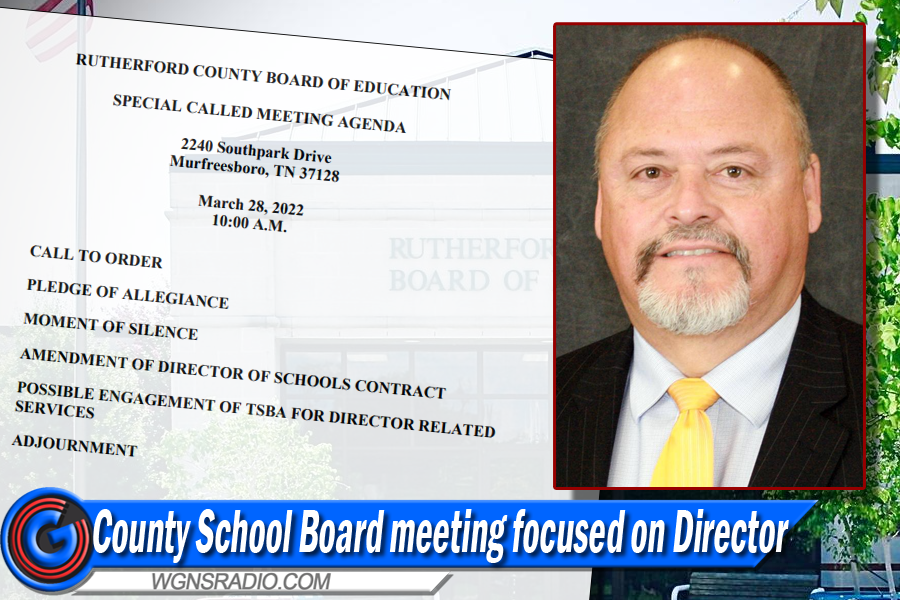 The specially called Rutherford County School Board meeting to discuss the contract of the County Schools Director got off to a rocky start, with residents expecting to watch the meeting online – only to find the “LIVE” feed without video or audio. The Schools posted on their social media page at about 10:10 Monday morning, The livestream for this morning’s meeting is experiencing an issue and the recorded meeting will be uploaded to the youtube channel after the meeting has concluded.”

ADVERTISEMENT
Rutherford County School Board members will not keep Director Bill Spurlock at the helm, as discussed on Monday morning during a specially called meeting that was held at 10-AM (03/28/2022).

The vote to end his contract was unanimous, according to Tiffany Johnson, Chair of the Rutherford County School Board…

Director of Schools Bill Spurlock will end his current contract on June 30, 2022, after reaching an agreement with the elected School Board during a special-called meeting this morning.

The search for a new director will get underway immediately...

The board will meet again this coming Monday (April 4, 2022) to further discuss the hiring criteria for the next director.

During the 18-minute meeting on Monday, one question that was asked was in regards to Director Spurlock being allowed to hire and fire personnel during the remainder of his contract. Attorney Jeffrey L. Reed stated…

Reed said that he will continue to have the authority over hiring and firing employees, but will work with a new director or interim director to make those decisions.

School board member Tammy Sharp said she does not foresee a new director in place by August, but received the following response after her statement...

The newly amended contract will officially come to a close on June 30, 2022. However, his monthly pay will remain active until June 30, 2023, the end date of his original contract with the Rutherford County Schools.

Spurlock was named the Director of Schools for Rutherford County on July 1, 2018, previously working in assistant principal positions at Oakland High School and Riverdale High School.  He also worked as a teacher in the science department at Oakland.

Spurlock’s leadership as the schools head honcho has proven to be unpopular by multiple county school employees and parents over the 2021-'22 school year, which ultimately led to Monday’s meeting.

Earlier this month, Spurlock received negative reviews from the school board, which were discussed during a school board retreat. The board chair stated...

Spurlock stated at a previous board meeting: “It has been almost two years since Covid shut down our school district. We have learned many things about our district during these past two years. We have identified strengths and we have identified areas to be strengthened. However, through it all our students, teachers, administrators, staff and central office personnel have persevered through many obstacles brought on by the pandemic. Through problem solving and determination, our school district was a Level 5 School this past year along with nine reward schools. However, there is much work ahead to advance our district to the heights we seek and desire. Board Meeting Minutes March 10, 2022 Recently the conversation about our district has shifted from a narrative of student success to the results of the Director of Schools evaluation. It should never be about the person who sits in this seat and always about the opportunities for success for every child in our school district. My contract with the school board is set to expire on June 30, 2023. I’m invested in this district not only as the Director of Schools but as a father and a grandfather. The future of our school district is very bright and will need someone to take it to the next level. While writing this statement I was reminded of a verse of scripture that captures my feelings when it pertains to Covid. I have fought the good fight, I have finished my course, I have kept my faith. Therefore, if it is the will of this Board, I am agreeable to negotiate terms to amend my contract.”

The schools will begin the search for a new director within the upcoming weeks.

See the meeting below:

Scroll down for the release from the Rutherford County Schools.

Released from the Rutherford County Schools:

Director of Schools Bill Spurlock will end his current contract on June 30, 2022, after reaching an agreement with the elected School Board during a special-called meeting this morning.

Spurlock praised the work of schools during the past four years and the academic growth the district experienced during that time, despite the ongoing challenges presented by the COVID-19 pandemic.

“Our goal has always been to give students opportunities to be successful and to ensure they are empowered to choose the most efficient way to pursue their aptitudes and interests,” Spurlock said. “It’s been a team effort, and I am truly honored to have worked alongside so many dedicated educators and staff members through the years who truly have the best interests of students at heart.”

Speaking on behalf of the School Board, Chair Tiffany Johnson thanked Spurlock for his passion for public education in Rutherford County and the academic achievements made during his tenure.

Following the meeting, Johnson said, “The director’s position is at times a thankless job, and COVID certainly impacted the past two years. We appreciate all that Mr. Spurlock has done and wish him well.”

Spurlock’s contract was scheduled to end June 30, 2023, but he and the School Board agreed to renegotiate his contract to shorten it by a year. The contract with Spurlock provides he is to continue to receive monthly compensation through the end of his original term of June 30, 2023 as provided in the contract.

After reaching the agreement, the School Board voted to engage the Tennessee School Boards Association and use its services in the search for the next director. Additional information will be available after TSBA meets with the School Board to discuss the criteria and timeline.