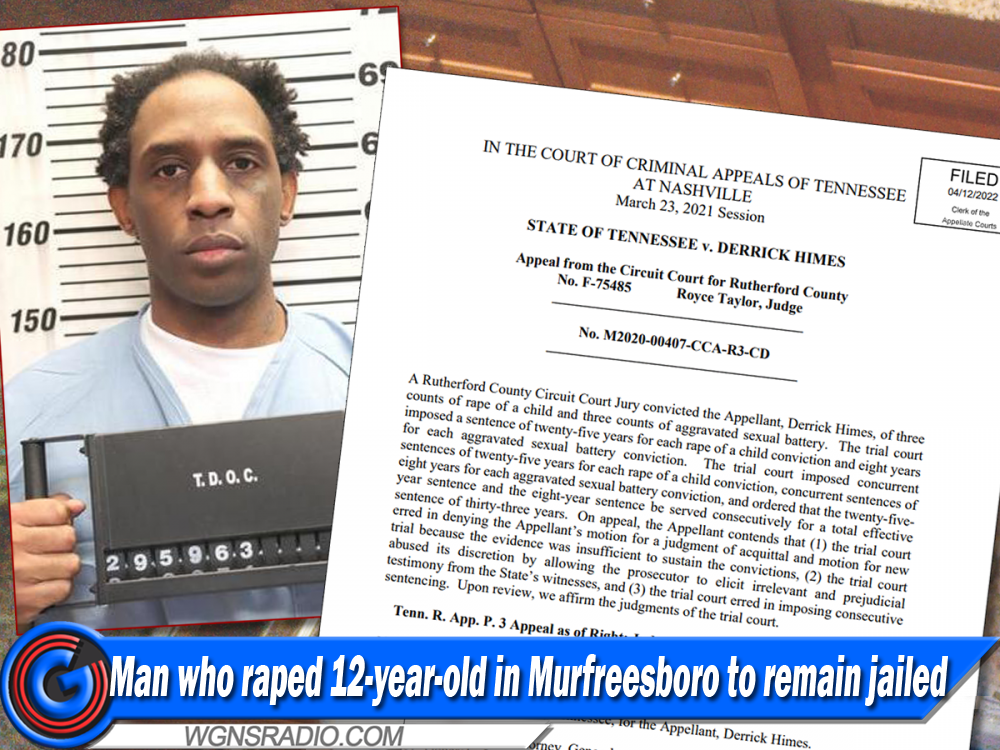 A man convicted on three counts of “Rape of a Child” in Rutherford County has appealed his case with the Court of Criminal Appeals.

50-Year-old Derrick Himes was convicted in 2019 by a Rutherford County Circuit Court Jury for rapes he committed in 2007. Himes was also found guilty on three counts of aggravated sexual battery during the trial.

ADVERTISEMENT
Court documents show when Himes committed the rapes, he was 35-years-of-age and the victim was only 12-years-old. Documents also showed the child told the courts she lived with her mother, grandmother and sister when the rapes occurred. At the time, the victim recalled “all kinds of people” staying in the cramped 2-bedroom apartment and that she and her sister “slept in any room” they could find to sleep. She recalled sleeping on the floor numerous times.

Records show the child told the courts that she went to her mom to tell her about one of the rape incidents and her mother allegedly accused her of “trying to steal her man.” Little did the mother know that she tried to escape the grasp of Himes multiple times, according to court documents.

Man to remain in prison - Continued...

The case was investigated by Murfreesboro Police Detective Tannas Knox after she received a referral from the Department of Children Services.

In the appeal filed by Himes, he claimed the trial courts in Rutherford County made a mistake in denying him a motion for a judgement of acquittal and motion for a new trial. Himes suggested the evidence was insufficient to sustain the convictions.

A Tuesday (04/12/22) filing by the Court of Criminal Appeals confirms they agreed with the lower courts’ decision in Rutherford County. As a result, Himes will remain in prison and keep his concurrent sentences that add up to thirty-three years.

The Tennessee Sex Offender will remain on the Sex Offender Registry for life with the marking of "Offender Against Children." The prison sentence for Himes will end one month after his 79th birthday.