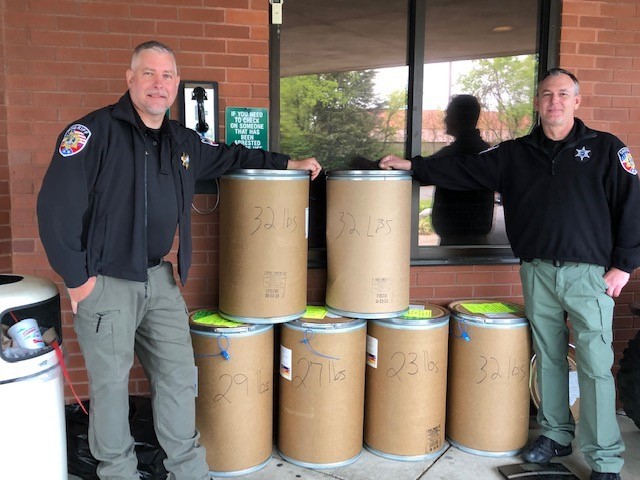 Sgt. Robert Dowell and Deputy Michael Heller will collect the unused prescription medications and over-the-counter drugs from residents Saturday at the Sheriff's Office.

Residents may dispose of expired and unused prescriptions from 10 a.m. to 2 p.m., Saturday, April 30 at the Sheriff’s Office at 940 New Salem Highway in Murfreesboro, said Sheriff Mike Fitzhugh.

People may drive up to the Sheriff’s Office main lobby where Sgt. Robert Dowell and Deputy Michael Heller will collect the medications.

ADVERTISEMENT
Dowell said they will accept both prescription and over-the-counter medications. Liquids and needles will not be accepted.

“This is just a safe practice,” Dowell said. “It’s the proper way to dispose of the medications.”

Cpl. Tom Bunch said disposing of the unused prescriptions will keep children from using the medicines. Also, the medications should not be disposed of in the sewer system.

Dowell said people bringing in the unused drugs do not have to remove the label off prescription medications. The pills may be brought in plastic bags.

“This is safe and discreet,” Dowell said. “After we collect the medications, the Tennessee Dangerous Drugs Task Force picks up and transports the medicine for incarceration.”

DEA reported drug overdose deaths are up 16 percent in the last year, claiming more than 290 lives every day.  According to a report published by the Substance Abuse and Mental Health Services Administration, a majority of people who misused a prescription medication obtained the medicine from a family member or friend.

The Centers for Disease Control and Prevention estimates that in the United States, more than 106,000 people died as the result of a drug overdose in the 12-month period ending November 2021, marking the most drug-related deaths ever recorded, with opioid-related deaths accounting for 75 percent of all overdose deaths.

For more than a decade, DEA’s National Prescription Drug Take Back Day has helped Americans easily rid their homes of unneeded medications—those that are old, unwanted, or no longer needed—that too often become a gateway to addiction. Working in close partnership with local law enforcement, Take Back Day has removed more than 15 million pounds of medication from circulation since its inception. These efforts are directly in line with DEA’s priority to combat the overdose epidemic in the United States.