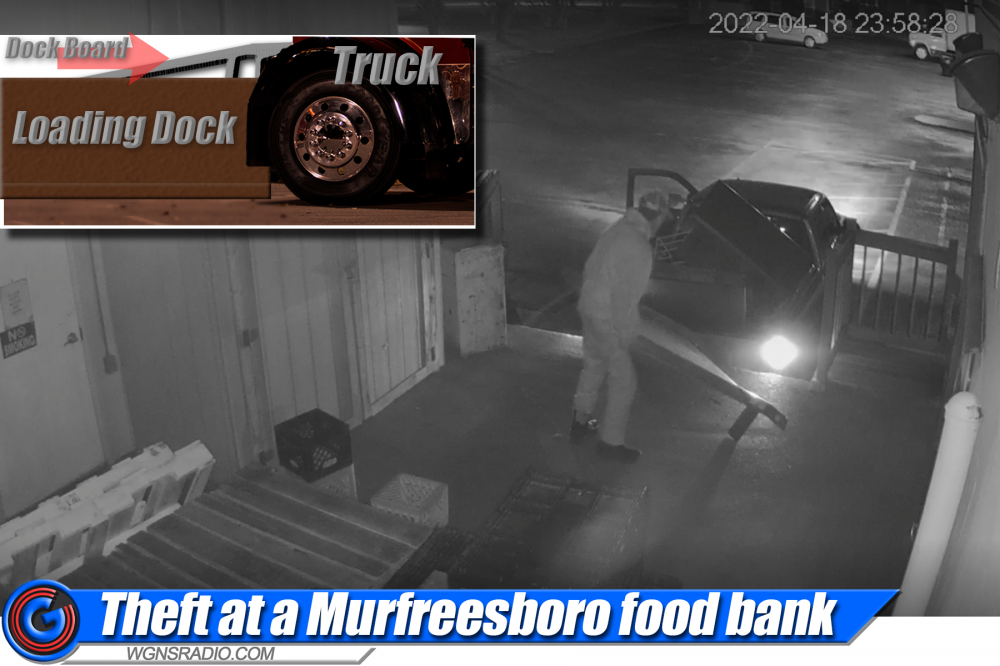 Scroll down for video of theft

(Murfreesboro, TN) Murfreesboro Police say they are investigating a case involving an unknown man who stole from a local foodbank. However, the thief was not after food.

Security camera footage from Nourish Food Bank shows the subject backed his truck up to the rear loading dock, got out and proceeded to lift, push and pull a loading ramp into the bed of his pickup.

ADVERTISEMENT
Nourish Food Bank exists to feed families that can’t afford something that most take for granted… food. Because of that necessity, the unknown thief stole from not only the non-profit corporation, but also from the mouths of those who lack the funds to keep their families fed.

The loading ramp that was stolen in this case was a commercial grade dock board, built to withstand the weight of a forklift to load crates of food on or off a box truck or shipping container. Heavy duty dock boards cost between $970 on the low-end and $3,500 on the high end.

The task to steal a dock board is no easy feat, as can be seen in the security footage released by police. Most industrial grade ramps weight at the very least 165-pounds. Furthermore, the ramp is cumbersome in size and measures in at approximately 6-feet wide by 5-feet long.

The video (below) shows how determined the “Person of Interest” was in this unusual theft of property case.

Sadly, the dock board that was stolen around midnight on April 18, 2022 was used almost daily to load or unload large amounts of food that are distributed to individuals and families in need.

Scroll down to learn how YOU can help Murfreesboro Police and Nourish Food Bank...

If you know the name of the subject captured on camera – or know of his whereabouts, local law enforcement would like to hear from you. To help police solve this crime, call Detective Arrington with the Murfreesboro Police Department at 629-201-5522.

Nourish Food Bank also has service locations in Smyrna and Nashville, but the Murfreesboro site is their distribution hub.

Listen to WGNS Everywhere! You can find WGNS on Streema, SecureNetSystem,
OnlineRadioBox, Radio.net, FMradioFree, and more!