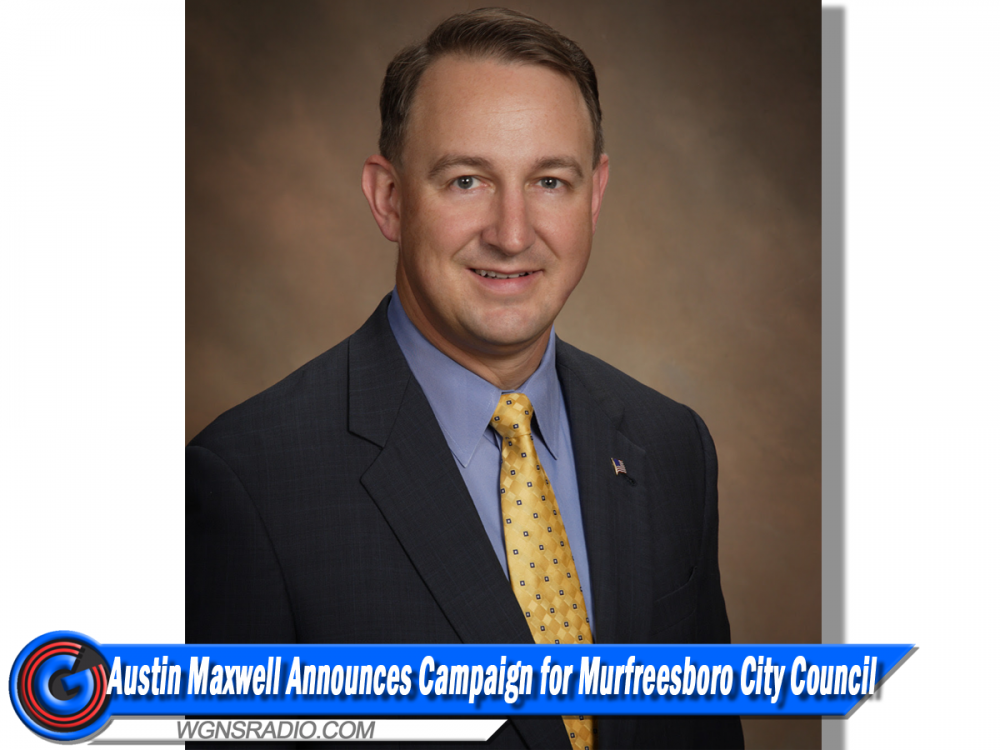 (Murfreesboro, TN) Rutherford County Republican Party Chairman Austin Maxwell announced this week that he will be seeking one of the three Murfreesboro City Council seats during the upcoming August general election.

Maxwell has lived in Murfreesboro since 1998. He and his wife Claire (Daniel) Maxwell re-located back to Murfreesboro in 1998 to raise their family while he pursued his career in the healthcare industry. During his time in Murfreesboro Maxwell has coached youth football in the Murfreesboro Parks & Recreation League as well as leading the Riverdale Football Quarterback Club from 2010 – 2013. Maxwell was previously Chairman of the Republican Party of Rutherford County from 2010 – 2013. He received his undergraduate degree from the University of Tennessee (1988) and his Master’s in Business Administration from Middle Tennessee State University (2007). He currently is chairman of the local GOP and is Secretary for the National Guard Insurance Trust of Tennessee. He retired from the Tennessee Army National Guard in 2017 after 28 years of service including deployments to Afghanistan and Iraq. His numerous military awards include the Combat Action Badge, Bronze Star, Purple Heart and Meritorious Service Medal. His wife Claire (Daniel) Maxwell previously worked for Rutherford County Schools as an Educational Assistant and currently serves on the Rutherford County School Board. The Maxwell’s attend First Baptist Church on East Main Street.

“I served my country for over 20 years and it is now time to serve my city. Murfreesboro is a special place and a place that I love dearly. I want to make sure that our city stays fiscally sound while also ensuring that we have the best in city services, first responders, roads, and parks so that our city remains the best city in all of Tennessee to work and raise a family. I am running because I am concerned about some of the big city challenges that our little city is facing with regards to the landfill, rapid growth, crime, our roads, and many other things that threaten our quality of life and way of life. If elected I will bring my many years of business leadership and military leadership to ensure that we make the best decisions so that all our citizens can continue to grow and thrive for generations to come.

This release was submitted by Austin Maxwell for Murfreesboro City Council.