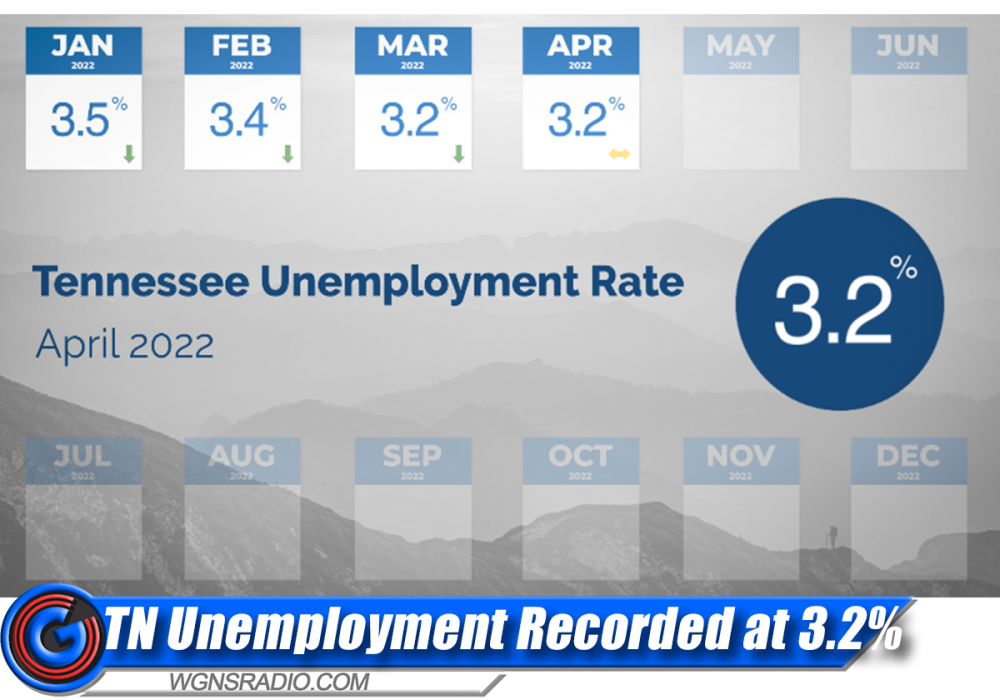 New data from the Tennessee Department of Labor and Workforce Development (TDLWD) revealed unemployment across the state remained at a historic low in April. The state reached its all-time low unemployment rate in March, and April’s seasonally adjusted rate of 3.2% mirrored the previous month’s record-breaking number.

While county-by-county numbers have not yet been released, the state as a whole fared well. The labor department will release the breakdown of unemployment figures for each of Tennessee’s 95-counties on May 26th. Those numbers are expected to be similar, if not the same as the unemployment rate recorded in March when Rutherford County garnered a 2.4% unemployment rate.

Employers across the state added 7,700 nonfarm jobs between March and April. The leisure and hospitality sector saw the largest number of new positions. The professional and business services sector had the next biggest increase in jobs, followed by the mining, logging, and construction sector.

Over the last 12 months, the state’s employers added 145,600 nonfarm jobs. The leisure and hospitality sector created the largest percentage of those jobs, followed by the trade, transportation, and utilities sector and the professional and business services sector.

Unemployment across the nation also remained unchanged in April at 3.6%. One year ago, the national rate came in at 6%.

TDLWD has produced a complete analysis of the state’s unemployment data for April 2022. That report is available here.

The state offers Tennesseans trying to return to the workforce a variety of free services that can help them find meaningful employment. Job seekers can take advantage of career counseling, job search assistance, and even programs to help pay for necessities such as uniforms and gas. Many of those services are available both online and in person. TNWorkReady.com has all the information needed to get started.

Tennessee nonfarm employment has fully rebounded from the pandemic, surpassing pre-pandemic levels of employment with 45,500 more people holding jobs now than in February 2020.

The Tennessee Quarterly Business and Economic Indicators report issued by Secretary of State Tre Hargett’s office shows that state unemployment dropped to 3.2%, below the national rate of 3.6%.

“Employment exceeding pre-pandemic levels is an important milestone for our state,” said Secretary Hargett. “It reflects Tennessean’s resilience and our leaders’ commitment to a business-friendly environment that encourages investment and job growth. As the economy resets, we are seeing more companies choosing to make Tennessee their new home.”

Growth in business filings typically leads to growth in jobs, personal income and state revenue. The largest number of filings in the first quarter were in Shelby County, followed by Davidson, Knox and Hamilton counties. These four most-populous counties accounted for 44.3% of new filings state-wide.

However, most of the year-over-year growth in filings occurred in Tennessee’s other 91 counties. Businesses in those counties expanded by 16.2%, reflecting efforts across the state on workforce development, education, infrastructure and responsible fiscal management.
“Everywhere you look, there’s evidence that the strong economic momentum in Tennessee isn’t slowing down,” said Bill Fox, director of the Boyd Center for Business and Economic Research. “Nonfarm employment has not only recovered to pre-pandemic levels, but has exceeded them. Tax revenues are up; personal incomes are up. Our growing economy is not only beneficial to Tennesseans, but attractive to others wanting to move here, too.”