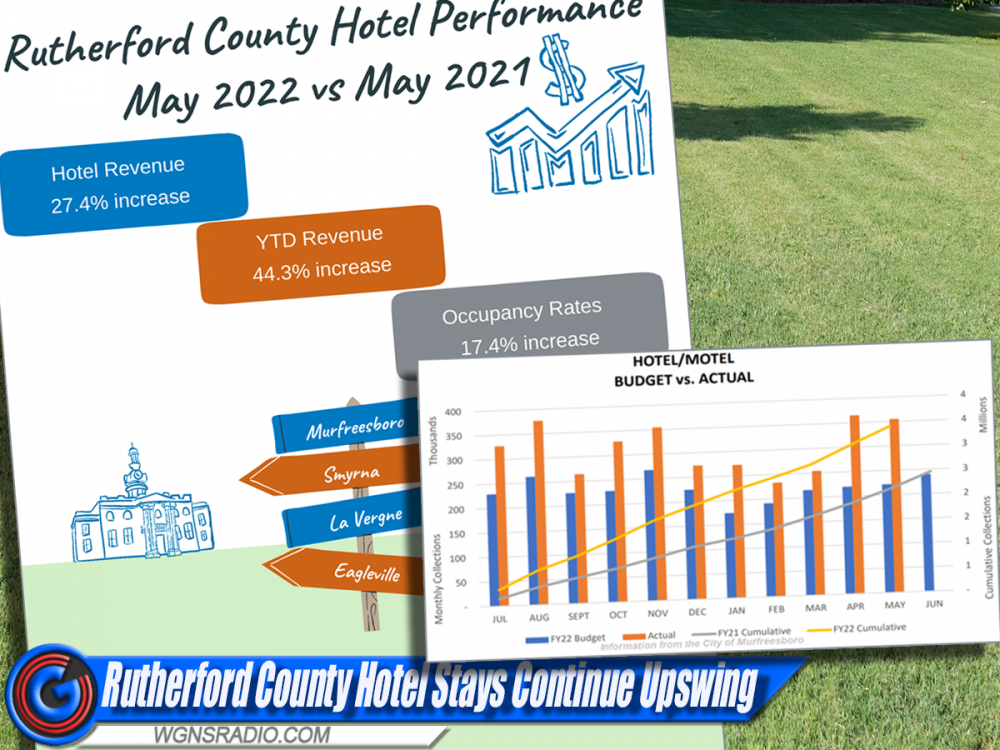 RUTHERFORD COUNTY, TENN. - Rutherford County’s hotel partners continue to increase their numbers according to the May STR report. In comparison to May 2021, hotel room revenue saw a $2.7 million increase. Revenue remains strong with a 44.3% increase year-to-date, with demand up to 77,120 additional rooms sold.

Earlier this month, WGNS reported the hotel/motel tax collected specifically in Murfreesboro has noticeably gone up, which means more and more people are returning to Rutherford County for their travels. So far this year, there has been a sizable increase in hotel stays that indicate an increase over pre-pandemic numbers. On top of that, tax collections are more than half OVER what was budgeted in the city’s original forecast.

This is one case of where being over budget is a positive, because it represents higher tax collection numbers, which means more people are visiting the Murfreesboro area and more hotel rooms are being rented to guests.

Overall, hotel/motel tax collections are up by 38% for the year. Recently released results also indicate that hotel stays, as seen in the form of the hotel tax being collected, have increased by 60% over last year’s numbers through May. Reports also show that local hotels stays are higher than pre-pandemic levels, according to tax collections by the City of Murfreesboro.

The city reports good news all the way around for hotels and motels in Murfreesboro and suggests, “This upward trend is expected to continue.”

At some of our parks, there have been marked increases in visitors. The National Park Service reported that 366,000 Stones River Battlefield Park visitors spent an estimated $23.8 million in the area while visiting the battlefield. Those funds support 313 jobs, $12.7 million in labor income, and $34.6 million in economic output in the area surrounding Stones River National Battlefield. In addition, visitor spending in 2021 was up $5.7 million over 2020.

Source of Above Information: Rutherford County Chamber of Commerce and Visitors Center, City of Murfreesboro

MORE ON HOTELS NATIONWIDE – Midway through 2022, the hotel industry continues to make strides toward recovery, with nominal hotel room revenue and state and local tax revenues projected to exceed 2019 levels by the end of this year, according to the American Hotel & Lodging Association (AHLA)’s 2022 Midyear State of the Hotel Industry Report.

Hotel room revenue is projected to surpass $188 billion by the end of 2022, eclipsing 2019 figures on a nominal basis. When adjusted for inflation, however, revenue per available room (RevPAR) is not expected to surpass 2019 levels until 2025. Hotels are projected to generate nearly $43.9 billion in state and local tax revenues this year, up almost 7% from 2019 levels.

AHLA’s 2022 Midyear State of the Industry Report includes updated forecasts and trends on hotel performance and investment and traveler sentiment. It is based on data and forecasts from Oxford Economics, AHLA Platinum Partners STR and Avendra and Silver Partner JLL, and survey research commissioned from Morning Consult.

“After a tremendously difficult two and a half years, things are steadily improving for the hotel industry and our employees. This progress is testament to the resilience and hard work of hoteliers and hotel associates, who are welcoming back guests in huge numbers this summer,” said AHLA President & CEO Chip Rogers. “While these findings highlight the important role hotels play when it comes to creating jobs, spurring investment and generating tax revenue in communities across the country, they also underscore the lingering challenges posed by one of the tightest labor markets in decades. That’s why both AHLA and the AHLA Foundation are focused on helping hoteliers fill open positions.”

Like many industries, hotels continue to face a major workforce shortage that could impact recovery. In 2019, U.S. hotels directly employed more than 2.3 million people, according to Oxford Economics. This report forecasts that hotels will end 2022 with 1.97 million employees, or 84% of pre-pandemic levels. The hotel industry is not expected to reach 2019 employment levels until at least 2024. According to a May 2022 AHLA survey, 97% of hotels indicated they are experiencing a staffing shortage, 49% severely so. Survey respondents indicated they had hired an additional 23 employees per property in the last three months but were also trying to fill an additional 12 positions.

The AHLA Foundation’s new national ad campaign, “The Hotel Industry: A Place to Stay,” aims to help bridge the employment gap while introducing job seekers to the 200+ career pathways and many perks the hotel industry offers.