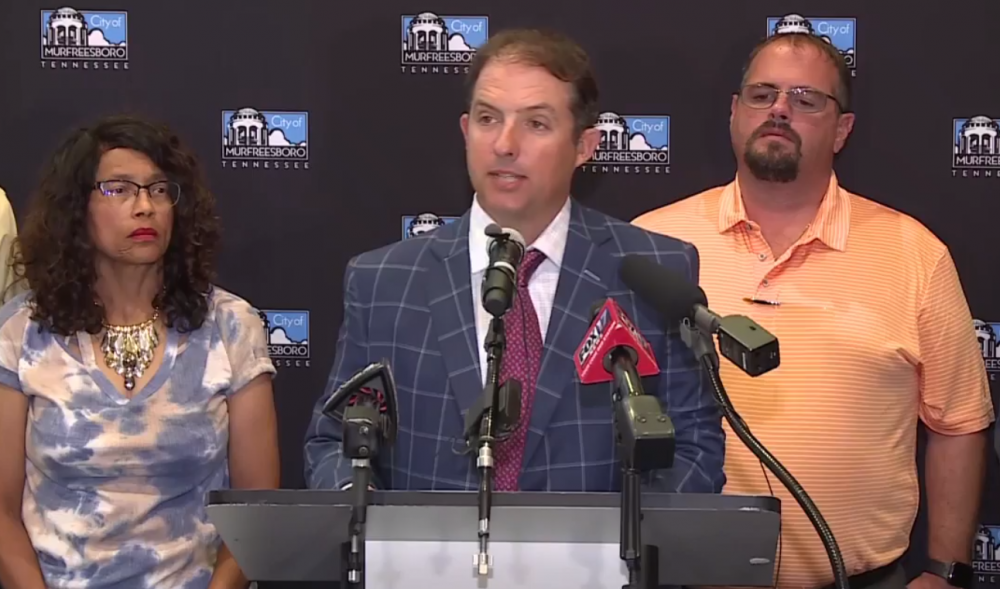 Ongoing environmental problems, including odor and water pollution, have led the City of Murfreesboro to file a federal lawsuit against the operators of Middle Point Landfill:

Murfreesboro Mayor Shane McFarland made the announcement Wednesday (8-10-22) afternoon. He says odor complaints are in the thousands:

In addition to the ongoing odor problem, the city has recently uncovered evidence of additional environmental problems at the landfill. The mayor calls this new evidence "a game changer":

The mayor says the city will be posting signs at the Walter Hill Recreation Area advising people who are boating or swimming in the Stones River to not injest the river water.

VIEW THE FEDERAL COMPLAINT FILED BY THE CITY OF MURFREESBORO

Today, the Murfreesboro City Council voted to take decisive action against the owners and operators of Middle Point Landfill. After consultation with legal counsel, the City Council voted to file a federal lawsuit against Republic Services, Inc. and two of its subsidiary, BFI Waste Services of Tennessee, LLC and Republic Services of Tennessee, LLC. That lawsuit will be filed later today in the U.S. District Court in Nashville.

Since September 2021 when the City opened an online odor complaint portal, the City has received over 2,000 detailed complaints related to the landfill. These complaints were received after multiple public assurances from Republic a year ago that the odor problem would be gone. Yet, the problem persists. The source of the odors is not simply trash at the landfill. Landfill-related odors are connected to the way a site is operated, including how the gases and millions of gallons of leachate produced by the landfill are collected and managed. Landfill gas emissions and leachate outbreaks at any landfill will cause harsh odors like those described in hundreds of citizen complaints received by the City. At Middle Point, landfill gas emissions and leachate outbreaks and other problems have been repeatedly documented. These problems are in addition to the massive, uncovered trash piles at Middle Point that finally caught fire in June.

The City has steadily and actively engaged to protect its interests and the interests of the residents of Murfreesboro and Rutherford County. In February, an outside consultant using an infrared camera found plumes of noxious gases lofting out of the landfill’s enclosed gas flares. Those plumes should and would not be there if the flare combustion system was working properly. Months before the City obtained that footage, the U.S. Environmental Protection Agency found the same thing in August of 2021. In its report, the EPA noted that something may be wrong with the flare system because those conditions were not seen at other landfills. The plumes of gas revealed by infrared cameras do not magically disappear. Depending on wind direction and thermal layers, those gases travel and can make ground contact and infiltrate homes and businesses.

In addition to the ongoing odor problem, the City has recently uncovered evidence of additional environmental problems at the landfill. This new evidence is a gamechanger and is detailed in the federal complaint, particularly at paragraphs 28 through 35. Before preparing the federal complaint, the City found and sampled a surface discharge off the landfill of waters contaminated with leachate, pouring into the river near Walter Hill Recreation Area.  The City also found and sampled a second discharge south of Matthew's Lake area where a groundwater source also contaminated with leachate has been continuously flowing into the East Fork Stones River. According to Republic, they are not polluting the river. The evidence says otherwise.  Pollutants at both discharge locations contain a chemical fingerprint that closely matches the leachate from Middle Point. In addition to all of that, there is yet another pollutant in both discharges that acts as a tracer connecting both discharges to Middle Point's landfill leachate.

That additional pollutant is a chemical known as PFAS. It was found in very high levels in the landfill leachate samples and in corresponding levels in both discharges to the river. The PFAS chemicals presents a new set of problems for the City to address, and the City is addressing it, right now.

PFAS chemicals are toxic. Accordingly, the City will be posting signs at Water Hill Recreation Area advising people who are boating or swimming in the Stones River not to ingest the river water.

In addition to the federal complaint, the City will deliver two written notices to Republic, the Tennessee Department of Environment and Conservation and to the U.S. Environmental Protection Agency. The first notice details the leachate contaminated discharges to the East Fork Stones River and alleges violations of the Federal Clean Water Act. The second notice documents violations of the Federal Clean Air Act. The filing of these notices is required by federal law before the City can file additional claims under the Federal Clean Water Act or Clean Air Act. The City states in the notice that it will file additional claims against Republic under these laws if the discharges and gas and odor issues are not resolved within 60 days.

We have no further comments and will not be taking questions at this time. Copies of the federal complaint will be posted on the City’s website today with the copies of the 60-day notices to follow shortly thereafter. We refer you to these documents as they set forth the most relevant facts in detail and should answer any other question you might have at this time. In addition, we refer you the EPA’s Interim Drinking Water Health Advisory for PFAS, a copy of which will also be posted to the City’s website.

WATCH THE VIDEO FROM THE CITY OF MURFREESBORO OF THE PRESS CONFERENCE ANNOUNCING THE FEDERAL LAWSUIT FILING.

Prior to the announcement, the Murfreesboro City Council will meet in a Regular Workshop meeting at 11:30 a.m., Wednesday morning (Aug. 10, 2022), at the Municipal Airport Business Center (Community Room, 1930 Memorial Blvd.) to discuss issues with staff.

During the meeting, the Community Investment Program Funds will be addressed, along with a possible transfer. The investment funds come from the proceeds gained by Murfreesboro when the city sold the electric department to Middle Tennessee Electric.

Council members will also discuss an aviation lease extension, along with a potential development agreement with Notes LIVE, which was previously turned down at a past city council meeting.

The full agenda is viewable on the City website at https://www.murfreesborotn.gov/AgendaCenter/ViewFile/Agenda/_08102022-1671.