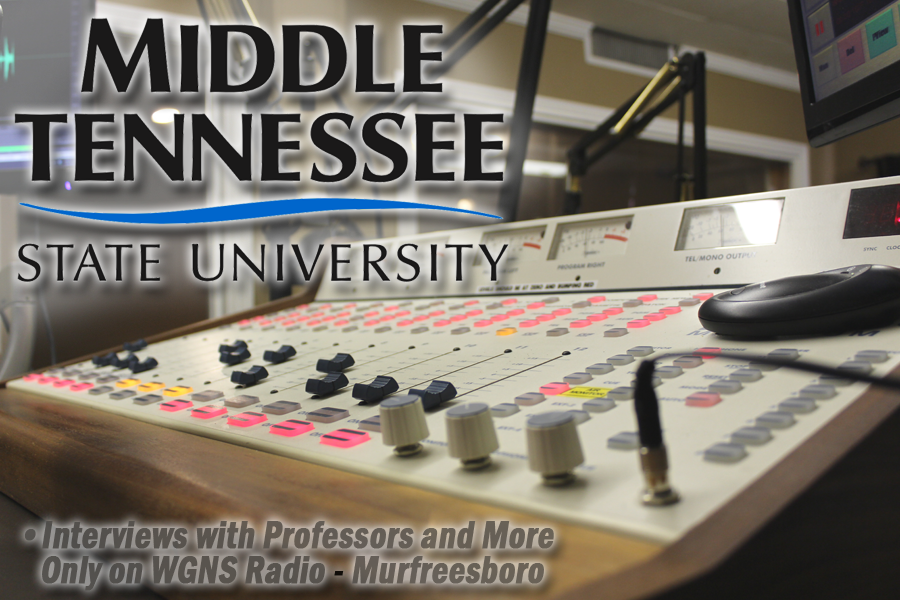 (MURFREESBORO, TN) On today's WGNS Action Line, host Scott Walker took a look at several topics on the MTSU campus. Below, you can see the information and a description of each segment. Listen to the full Podcast Above!

Registration is open for one of MTSU’s most enlightening events about one of the world’s most devastating tragedies.

The 14th biennial Holocaust Studies Conference is slated for Thursday, Sept. 22, and Friday, Sept. 23, on the MTSU campus with the theme of “Teaching the Holocaust Today.”

A highlight of this year's conference will be a Friday, Sept. 23, appearance by Sonja Dubois, a resident of Knoxville, Tennessee, who will share her survival story at the conference. It is free and open to the public.

Dubois will give a talk titled “Finding Schifrah: A Holocaust Child Survivor's Journey and the Making of a Memoir” and answer questions from 2 to 4 p.m. in the Student Union Ballroom, after which she will have a book signing for her book, "Finding Schifrah," which explores her journey as an adult to uncover the truth of her identity and understand her Jewish heritage.

Born in 1940 in Rotterdam, The Netherlands, Dubois’ parents were transported to the notorious Auschwitz death camp in 1942. A Dutch foster family raised Dubois without telling her initially about what happened to her biological parents. In hundreds of speeches and visits to schools, Dubois has talked about her lifelong search for understanding.

On Thursday, Sept. 22, Atina Grossman, a professor of history at The Cooper Union in New York City, will present the keynote address at 10:30 a.m. in the Student Union Ballroom. The event is free and open to all MTSU students, faculty and staff.

In her lecture, titled “Remapping Holocaust Studies: Teaching and Research in Global Context,” Grossman will consider how to help students recognize connections between the Holocaust and racism, antisemitism and colonialism while continuing to acknowledge the Holocaust’s uniqueness in history.

To register for the full conference and for cost details, go to https://tinyurl.com/2nu539y8.

For MTSU geosciences professor and researcher Alisa Hass and her collaborators at the Nashville, Tennessee, mayor’s office, a recent early morning research excursion was the result of months of hard work and preparation.

It was finally time to collect Nashville’s heat data as part of their research for the National Oceanic and Atmospheric Administration’s Heat Mapping Campaign to chart heat risk in an urban heat island environment — city areas that can be up to 20 degrees hotter than surrounding rural areas and neighborhoods.

The goal is to identify and help communities manage neighborhoods vulnerable to extreme heat.

Hass and Kendra Abkowitz, chief sustainability and resilience officer at the mayor’s office, set up at 5 a.m. Aug. 14 in the lobby of the Adventure Science Center in Nashville to oversee what was a true community effort.

The two distributed heat sensors and instructions to the first shift of 10 “community scientist” volunteers who signed up for the 6 a.m. traverse. Volunteers drove an assigned, hour-long route no faster than 35 mph to record temperature, humidity, time and location data via the sensors attached to their car windows.

A mix of repeat and new volunteers helped collect data on two traverses later that day at 3 p.m. and 7 p.m. to flesh out the temperature “picture” of Music City at different times.

After data collection, the research team shipped the sensors back to the supplier CAPA Strategies LLC to be analyzed, and the results will be publicly available, Hass said.

“This data will (then) be used by MTSU to develop future research opportunities with students and will be incorporated into courses in the Department of Geosciences,” she said.

Jarett Decker is the Joey Jacobs Chair of Excellence in Accounting and Professor of Practice at MTSU.

A former head of the World Bank’s Centre for Financial Reporting Reform in Vienna, Austria, he has advised governments on reforms to improve corporate accounting, auditing, and governance in more than 30 developing and transitional countries in Europe, Asia, and Africa.

He was also the first person to serve as Deputy Director and Chief Trial Counsel for the Public Company Accounting Oversight Board (PCAOB), the entity created by Congress to police corporate auditing in the wake of the Enron and WorldCom accounting scandals.

He established and led the PCAOB’s program of disciplinary litigation against Big Four and other public accounting firms for violations of auditing standards, ethics, and securities laws in the auditing of publicly traded companies and broker-dealers.

Before his PCAOB service, Decker was Senior Trial Counsel for the U.S. Securities and Exchange Commission (SEC) in Chicago. Decker has been quoted on issues of international financial governance and transparency in the Financial Times, The Asian Banker, and the NewStraits Times (Malaysia), among other publications.

He served as an adjunct scholar with the Cato Institute from 1995 through 2003 and has published articles in the New York Times and Reason magazine, among other publications.

A graduate of the University of Michigan Law School and the College of William and Mary, Decker is a lawyer and CPA.