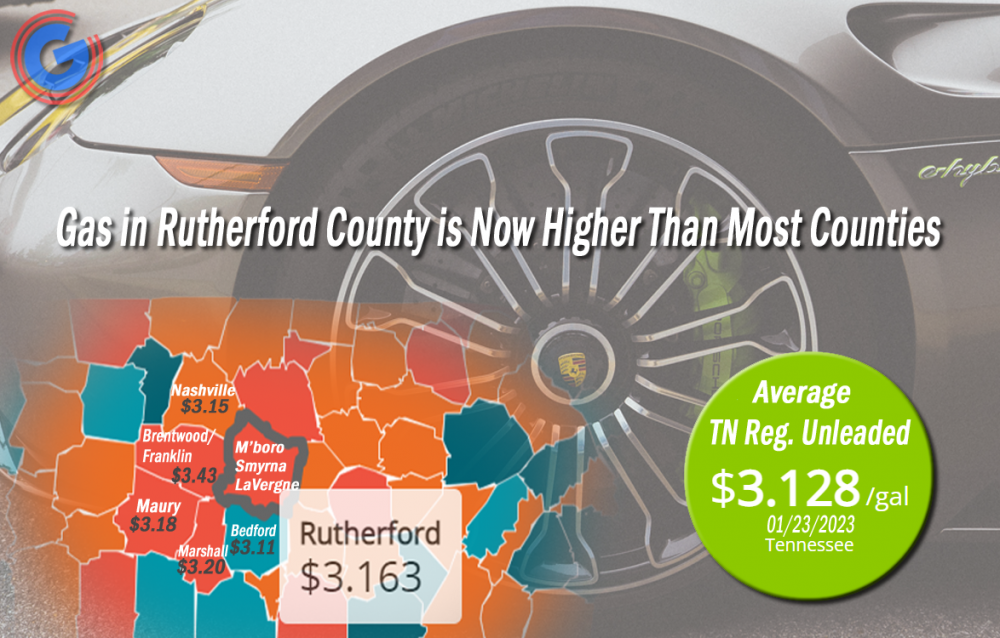 While Rutherford County had some of the lowest gas prices in the state for months on end, that is no longer the case. On Monday, the average cost for regular unleaded fuel in Rutherford County rang-in at $3.16 per gallon. Music City has the Murfreesboro / Smyrna area beat by one penny, averaging $3.15 per gallon. In Bedford County, the average price for regular unleaded gas is $3.11 per gallon. Neighboring Williamson County has one of the highest prices in the state, averaging $3.43 per gallon.

According to GasBuddy price reports, the cheapest station in Tennessee was priced at $2.49/g yesterday while the most expensive was $3.99/g, a difference of $1.50/g.

Historic 10-Year Look at Gas Prices in Tennessee and the U.S.

"Gasoline prices continued their upward trajectory last week as oil prices pulled them higher across the majority of the country, and continued refinery challenges kept supply of gasoline from rising more substantially," said Patrick De Haan, head of petroleum analysis at GasBuddy. "Macroeconomic factors have continued to weigh on oil and refined products, as strong demand in China hasn't been slowed much by a surge in new Covid cases. In addition, releases of crude oil from the Strategic Petroleum Reserve have wrapped up. Concerns are increasing that without additional oil, supply will tighten in the weeks ahead, especially as the nation starts to move away from softer demand in the height of winter. Moving forward, it doesn't look good for motorists, with prices likely to continue accelerating."

GasBuddy is the authoritative voice for gas prices and the only source for station-level data. GasBuddy's survey updates 288 times every day from the most diverse list of sources covering nearly 150,000 stations nationwide, the most comprehensive and up-to-date in the country. GasBuddy data is accessible at http://prices.GasBuddy.com.