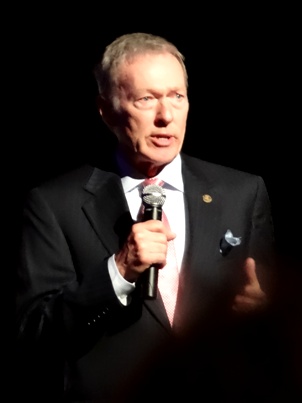 Some of the Volunteer State's best known names in radio were inducted into the Tennessee Radio Hall of Fame at the Embassy Suites Hotel here in Murfreesboro Saturday night (5/4/2013). Hall of Fame board member Gary Beaty did a tremendous, conversational job of hosting the evening. In addition to years at WSM as well as the Saturday morning live commercials from a Nashville car dealer, Beaty also enjoyed on-air time with WGNS.

This was the second class of Tennessee broadcasters who were inducted into the Hall of Fame, and a repeat opportunity for Murfreesboro to host the gala. The non-profit group is dedicated to recognizing those who have invluced and those whose careers are in Tennessee' radio .

Past Chamber of Commerce President Ralph Vaughn, whose broadcast days included WJLE in Smithville and locally at WGNS, is now president of the statewide group. He noted that future plans include locating a suitable venue where this history can be stored and visited by friends from around the world.

Vaughn challenged those in the packed ballroom, "Over the next week, get in touch with someone who helped and encouraged you to get into radio. Let them know how much they have meant to your life."

A Rare Career Filled With Fun

After listening to those who were honored, it was obvious that they all had similar stories of loving what they do (did) and being proud of how the radio industry continues to make a difference in the lives of those in the community it serves...from waking listeners with a laugh, news and weather each morning...being a mirror of each community and sharing that area's successes and challenges...to being the communications link in times of natural or manmade disasters. They all agreed, radio is a fun and rewarding career.

Seven people were inducted in the Career category, which honors those still living and in many cases, still working in broadcasting. They are:

Les Acree: Legendary country programmer and consultant who worked at stations in Memphis (WMC, WGKX and WMQM), Nashville (WKDA), and Knoxville (WIVK). He was named Program Director of the Year by Billboard in 1991, 1994 and 1997 and by the Gavin Report in 1998.

Rick Dees: He rose to national fame while working mornings at WMPS in Memphis, when he wrote and recorded “Disco Duck,” which sold six-million copies and won a People’s Choice Award. Dees moved to WHBQ in Memphis and later to Los Angeles. He was Billboard’s Top 40/CHR major market “Air Personality of the Year” for 10 consecutive years.

Tommy Jett: One of the original “Jet-Fli” guys on 50,000 watt WFLI, the name Tommy Jett Reynolds has been
synonymous with top 40 rock in the Chattanooga area for more than 50 years. He has hosted country and oldies shows on several stations and can now be heard on his website, TommyJett.com. He also emcees shows and is active in charity events and high school reunions with his “Tommy Jett Music Machine.”

George Klein: Klein has a 50-year radio and tV career in Memphis, starting with WHHM’s high school football broadcasts and baseball broadcasts for the Memphis Chicks at WHBQ. He worked at KWAM and WMC, and was a close friend of Elvis Presley. He toured with Elvis before returning to WHBQ to host Channel 13’s Talent Party, which ran for 12 years. He later hosted Memphis Sounds for WYPL. He now has a show on the Elvis Channel on Sirius/XM. And you talk about an Elvis connection, George and Presley became friends in the eighth grade.

(Above L-R) Inductee Tommy Jett along with a friend and WGNS' Kerry Boylan; and one of Elvis' closest friends George Klein.

R. M. “Bob” McKay, Jr.: Bob McKay put WKRM in Columbia on the air in 1946. He later launched WPHC/Waverly in 1963, followed by WVRY-FM/Waverly in 1970. He acquired a second station in Columbia and changed its calls to WKOM. Active in numerous community organizations, McKay was a founding member of the Tennessee Association of Broadcasters in 1949, served as its president in 1971 and received the TAB Distinguished Service Award in 1981. He retired in 2008 at the age of 88 after 62 years in radio.

Pat Sajak: A native of Chicago, Sajak was in broadcasting school when he got his first radio job. In 1968, he joined the Army and was sent to Vietnam, where he was a DJ on Armed Forces Radio. He came to Nashville’s WSM-AM in the early 1970s, playing pop in afternoon drive. Sister station WSM-TV (now WSMV) brought him on screen as a staff announcer and later, as weekend weatherman. In 1977, KNBC in Los Angeles hired him to do weather full time. In 1981, Merv Griffin hired him as host of Wheel of Fortune. Besides his continued duties at Wheel, he also hosts The Pat Sajak Baseball Hour, a syndicated radio talk show.

The Tennessee Radio Hall of Fame also inducted nine persons in the Legacy category. These people have passed away, but are being recognized for the contributions they made to the industry during their careers. They are:

Noel Ball: Known as Nashville’s first flamboyant rock DJ, Ball worked in radio (WKDA, WMAK, WSIX), TV (Saturday Showcase and more on WSIX-TV), artist management and in records as a producer and head of Artists and Repertoire for the Nashville office of DOT Records. While at WMAK, he co-authored (with Alan Nelson and Gene Clark) “Day for Decision,” a spoken oration on American patriotism set to music and recorded by Johnny Sea. It received a Grammy nomination in 1967.

Tennessee Ernie Ford: Ernest Jennings Ford began his radio career at WOPI-AM in his hometown of Bristol,
Tennessee. He studied classical singing at the Cincinnati Conservatory of Music before World War II, where he served as a bombardier on a B-29. After the war, he worked in radio in California, and to differentiate himself, created the personality of “Tennessee Ernie,” a wildly exaggerated hillbilly. A singing, acting and TV career followed, and he received three stars on the Hollywood Walk of Fame (radio, records and TV). He was awarded the Presidential Medal of Freedom in 1984, was inducted into the Country Music Hall of Fame in 1990 and into the Gospel Music Hall of Fame in 1994.

Coyote McCloud: He worked at WGOW in Chattanooga as Bill Scott and became Coyote McCloud at WQXI in Atlanta. He became well-known in the early 1970s when he worked evenings on WMAK, Nashville and also worked at WWKX and WZPC. He became one of the most controversial DJs of the 1980s as lead man on The Zoo Crew on WYHY, and was featured in a CBS 48 Hours documentary on shock radio in 1992.

Luke Medley: When Luke Medley put WHUB/Cookeville on the air in 1940, it was the first radio station in middle Tennessee outside Nashville and only the 14th in the state. Medley was instrumental in the growth of Cookeville and Putnam County and held several key political and civic offices. He helped organize the Tennessee Association of Broadcasters and received its Distinguished Service Award in 1981. He was CEO of WHUB-AM and WHUB-FM (added in 1964) for 56 years.

George Mooney: In 1962, George Mooney piloted his boat up the Tennessee River to beat football game traffic and inspired the Vol Navy, one of the most unique traditions in college football. He was the voice of the Vols from 1952 until 1967. In 1958, he took over WKGN in Knoxville and it became Mooney Broadcasting, which included WMAK, WBYQ and WYHY in Nashville, as well as stations in Alabama, Florida and Puerto Rico. The National Sportscasters and Sportswriters selected him three times as Tennessee’s Most Outstanding Broadcaster.

Dewey Phillips: “Daddy-O Dewey” began his career on WHBQ in Memphis in 1949, and was the area’s leading radio personality for nine years with his Red, Hot and Blue Show, a mix of R & B, country boogie-woogie and jazz. The Broadway musical, Memphis, is said to be based loosely on his life and career. On July 8, 1954, Phillips was the first DJ to play “That’s All Right/Blue Moon of Kentucky,” the debut Sun Records release by a young artist named Elvis Presley.

Drue Smith: A pioneering female broadcaster, Drue Smith was first a newspaper journalist at the Chattanooga Times. In the 1940s and 1950s, she was a society and political commentator for WAPO, WDOD and WDEF, where she also hosted a daily TV show. After moving to Nashville in the 1960s, she had a long run as legislative reporter for the Tennessee Radio Network and WLAC Radio. In 1984, state lawmakers passed a resolution naming her their 133rd member. Following her death in 2001, they named the Capitol Hill Press Room in her honor.

Rufus Thomas: He was one of the most influential DJs in radio history, spinning tunes on WDIA/Memphis from
1948-2001. The self-professed "world's oldest teenager" was also renowned for recording hits like "Walking The Dog" and "Do The Funky Chicken," as well as best-selling duets with his daughter, Carla. During his career, Thomas received numerous awards and supported many local and national charities. The street in Memphis which bears his name crosses Beale Street, and the city of Porretta, Italy has designated Rufus Thomas Park as the site of an annual Soul Festival held in his honor each year.

This year’s Legendary Station honor goes to WDIA, Memphis. WDIA was the first radio station in America that was programmed by African-Americans for African Americans. It empowered a huge segment of the population that was, until the late 1940s, largely unrecognized. Its achievement was all the more extraordinary because it occurred during a time of institutionalized racism. WDIA began broadcasting with 250 watts at 730 on the AM dial; yet soon became the top station in the city.

In 1954, the station received a power increase to 50,000 watts at 1070 on the dial. Suddenly, it had the power to reach 10% of the total African-American population in the country. Its impact was enormous, and radio stations from other cities sent staff to Memphis to study how WDIA worked, in order to establish African-American stations in their own cities.

The home of legendary DJ Rufus Thomas, names like B. B. King and Isaac Hayes have also graced WDIA’s broadcasts over the years.

It was an evening of memories, and you could close your eyes and drift back to your childhood days when the magic of radio could take you anywhere your imagination would go. (Below L-R) Hall of Fame President Ralph Vaughn, retired WSM and Grand Ole Opry personality Ralph Emery and former WSM, WLAC, WMAK and earlier WGNS personality John Young share memories. In fact, Young is so proud of his roots, that he still is heard daily on WGNS. In 2011, Young was inducted into the George Radio Hall of Fame for his days at Z-93 and as the signature image voice to CNN and WTBS in Atlanta. Young has moved back to Tennessee, and is also the signature voice of News Channel 5 in Nashville.

Luther Masingill was brought  back from last year's class to receive a medal. At age 91, the beloved voice of Chattanooga shared jokes, memories and told of his love for radio. He is still on WDEF radio and TV daily, the station he joined on December 31, 1940. In addition to being inducted into Tennessee's Hall of Fame last year, on November 10, 2012, he flew to Chicago to be inducted into the National Radio Hall of Fame. Masingill's quick wit kept the Murfreesboro audience laughing Saturday night. In addition to having more than seven-decades under his belt at one station, he also has the dubious honor of being the only announcer who told listeners about the bombing of Pearl Harbor in 1941 and the attack to New York's Twin Towers in 2001. (Below L-R) Luther Massingill being honored by Hall of Fame Secretary Chip Chapman.