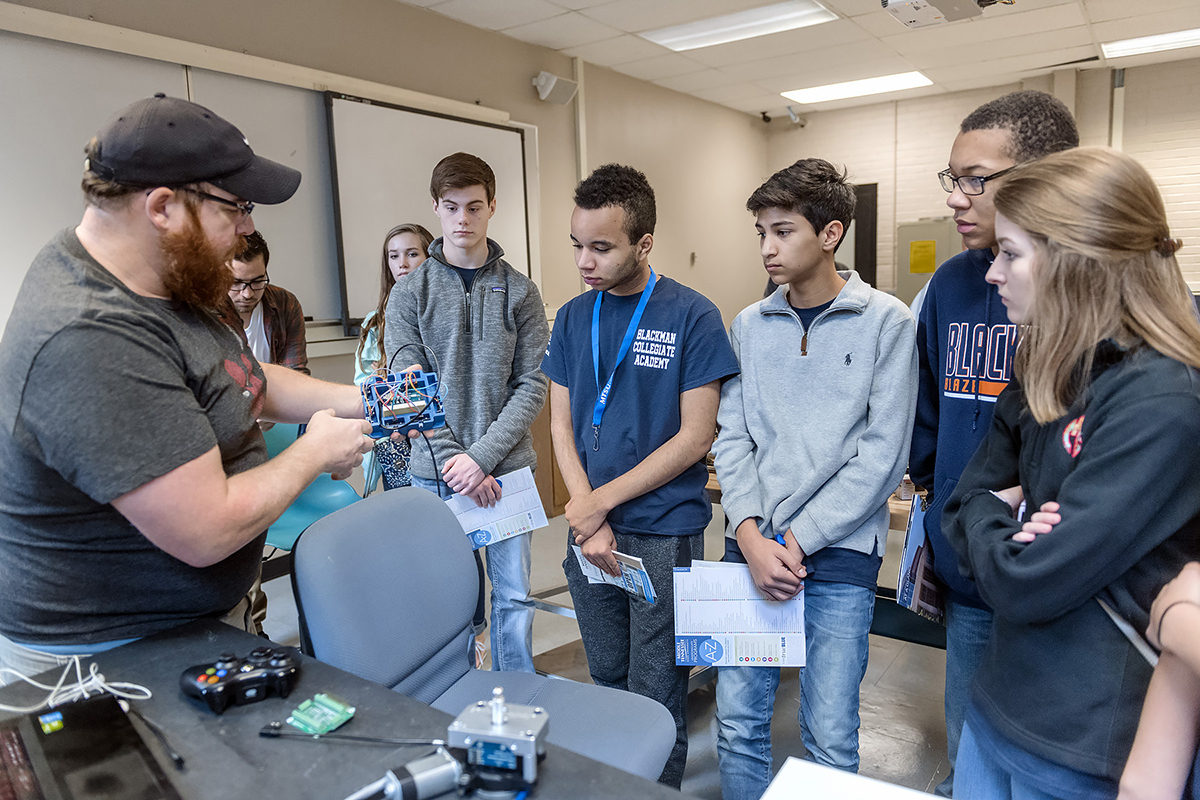 Working in pairs of two, 10 Blackman High School students tackled an assignment from William McDowell, professor and chairholder of the Wright Chair of Entrepreneurship in the Jennings A. Jones College of Business at MTSU.

McDowell gave the students, part of a group of nearly 70 Blackman Collegiate Academy sophomores on campus Thursday, Feb. 2, a limited time to "come up with an amazing new product."

The students completed their task, and one pair -- Landon Fowler and Sarah Oppmann -- stood out with their design of a hallway crossing guard that potentially could be implemented at their school.

The MTSU-Blackman partnership is one of several arranged each semester during the academic year. It allows freshmen, sophomores, juniors and seniors opportunities to spend time on the college campus, meeting MTSU students, faculty and administrators and learning about many of the university's 140-plus programs.

Fowler, 16, said it was "really interesting to learn how entrepreneurship works ... to make designs and make it happen."

Oppmann, 15, found it "nice to learn about all the different jobs," she said. "I never had been interested (in entrepreneurship), but now I am."

McDowell said the Blackman students did a great job of developing an idea, creating a rapid-prototype, and presenting to the others in the session. It was exciting to see their enthusiasm and innovation at work, he said.

"The time constraint sort of stressed them out, but they did come up with clever ideas," Blackman geometry teach Ginna Hamby said of the entrepreneurship session.

Other business classes included the insurance profession with Dave Wood and a Web development demonstration with Charles Apigian.

The Blackman students gained insight into all of MTSU's colleges within the university. They honed in on programs and potential careers in the fields of geosciences with Melissa Lobegeier and Henrique Momm; hands-on science with engineering trechnology's Walter Boles and Saeed Foroudastan, and physics and astronomy's Ron Henderson and more.

"We have good luck with the Blackman kids. They're focused," said Heather Brown, director of the School of Concrete and Construction Management.

While on campus, among the nearly 20 activities during their four hours, the Blackman students:

• Heard about a typical day in the life of a college student from MTSU Student Ambassadors.

• Learned about paths to success in communications, news and marketing from Jimmy Hart, director in News and Media Relations, and Kara Hooper, director in Creative and Visual Services.

• Took a recording industry tour with Stacy Merida and John Merchant and Center for Innovation in Media tour with Whitney Matheson.

• Discovered the Model U.N. at MTSU, a realistic simulation of the actual United Nations, with Vanessa Lefler.