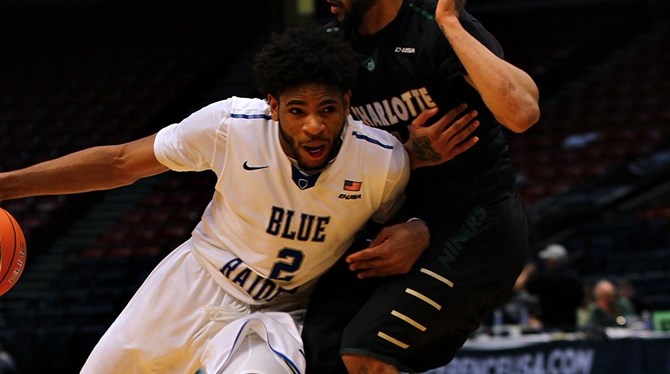 Middle Tennessee men's basketball took down 11th-seeded Charlotte in an exciting 63-60 victory in the first round of the Conference USA Championship on Wednesday.

The Blue Raiders improved to 17-15 on the season and remain an undefeated 5-0 in the first round of conference tournaments under Head Coach Kermit Davis.

With the victory, four-year seniors Jacquez Rozier and Gavin Gibson recorded their 96th with Middle Tennessee, the most wins by a MT class in program history. Davis is one win from his 250th with the Blue Raiders.

The sixth-seeded Blue Raiders will face third-seeded Old Dominion in the quarterfinals.

The Blue Raiders had to shake off the nerves early with Giddy Potts and Perrin Buford getting the start in their first-ever Conference USA Championship game alongside Reggie Upshaw, Rozier and Jaqawn Raymond.

In the early minutes MT was shooting just 25 percent before Marcus Tarrance came off the bench and helped the Blue Raiders get in a rhythm after he hit two 3-pointers.

In the first half the Blue Raider defense was crucial as the team forced eight 49ers turnovers with Raymond snagging two steals.

The 49ers Pierria Henry hit Charlotte's second trey of the half with a half court heave at the buzzer that put Charlotte up 30-29 heading into the locker rooms.

Of MT's 29 first half points, 14 of those points came from the bench.

As the second half began the two teams continued to battle back-and-forth with MT taking back a four point lead in the early minutes, only for the 49ers to close it down and take the lead.

Turnovers continued to plague the 49ers as they had 13 with 12 minutes remaining that led to a four minute scoring drought as MT went on an 8-0 run.

The Blue Raiders would lead by as many as nine with 8:30 remaining to take a 51-42 lead over Charlotte.

The 49ers would not back down as they pieced together an 8-0 run of their own to tie the game at 54-54 with five minutes remaining.

In the closing seconds, the game could have gone either way after 10 ties and 16 lead changes after Upshaw slammed one in to give MT the 62-60 lead. After a Potts rebound on the other end and a made free-throw, the Blue Raiders sealed it and took the victory 63-60.

Buford led the team in scoring with 14 points, with DJ Jones following with 10 points. The last time these two led the squad in scoring was at UAB as the two players find success playing in Birmingham.

Upshaw led MT off the glass with eight boards although the Blue Raiders were bested 38-31 in rebounding.

Charlotte shot an amazing 51 percent from the field but its 19 turnovers proved to be the difference maker with Jones securing a team-high three steals and Raymond and Upshaw collecting two a piece.

The Blue Raiders advance to play No. 3 seed Old Dominion Thursday at 2:30 p.m at Legacy Arena in Birmingham. The game will be broadcast live on NewsRadio WGNS. The Blue Raiders beat the Monarchs in the regular season on the same home swing that they beat Charlotte.