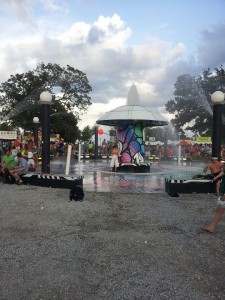 Tune in to TBS TV for the CONAN show on January 19 for the big news of the Bonnaroo 2016 lineup and other fun surprises. Bonnaroo is very excited to share the announcement and begin celebrating 15 Years of Magic with you in 2016! Tune in to TBS at 10pm central.

Bonnaroo Music and Arts Festival organizers announced this week that the installation of a permanent water line is in the works. The water line means flushable toilets, permanent showers and water filling stations for the thousands of festival attendees. Bonnaroo officials added in their announcement that the amenities will be in service by the time the festival kicks off on June 9.

In addition to the water line, the festival will implement a car camping pass for every vehicle to pass through the event's tollbooth. The pass will cost $59.75 and proceeds will sustain the "temporary city." Tickets go on sale January 22 beginning level one General Admission price of $324.50 plus fees. Ticket fees are $34.90 per ticket, which includes a $6.00 facility fee, $3.00 contribution to Coffee County, $2.00 donation to the Bonnaroo Works Fund, and other fees.