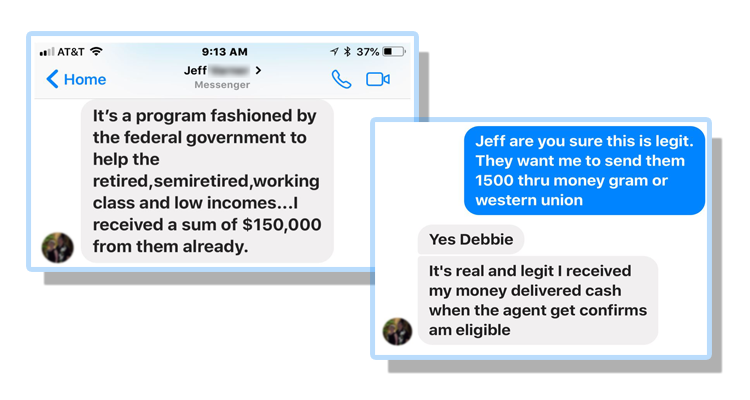 The Tennessee Bureau of Workers' Compensation (BWC) is warning Tennesseans of a scam in which victims are contacted via Facebook messenger and then asked to wire funds in order to receive money from a federal workers' compensation program.

The alleged scam artist, who used the account of an actual Facebook friend, recently contacted a Tennessee resident via Facebook Messenger to tell her she could be entitled to money through the new program. He explained the program is designed for the help retired, semi-retired, working class, and low-income earners.

During the online conversation with someone she thought she knew, the scammer told the woman she could receive upwards of $150,000.

But, in order to collect compensation, he told the woman she would have to pay upfront the taxes associated with the amount of money in order to receive payment from the government. The scam artist went so far as to give the woman a Rhode Island telephone number to text for more information about where to send money via Western Union.

The Tennessee Bureau of Workers' Compensation warns Tennesseans there is no such federal workers' compensation program.

"As soon as someone hears this, a red flag should go up," said Abbie Hudgens, BWC Administrator. "We want to do everything we can to warn people not to fall for a scam that preys on our neighbors who are having a difficult time making ends meet and can use this type of assistance."

The back-and-forth between the scam artist and Tennessee resident took place over Labor Day weekend and continued into Tuesday.

The scam artist was brazen enough to video call the woman, who took a screenshot of him, and determined it definitely was not the person who is her Facebook friend.

The woman eventually stopped communicating with the person and contacted a BWC ombudsman who assured her this was not a program sanctioned by the federal or state government.

"This is one of those cases where if it seems too good to be true, it probably is," Hudgens explained. "Thankfully this person did not fall for the scam and contacted the Bureau so we could make others aware this is taking place and not legitimate."

If anyone receives an unsolicited Facebook message claiming they are entitled to thousands of dollars through the workers' compensation program should immediately block the sender and contact Facebook to report the scam.