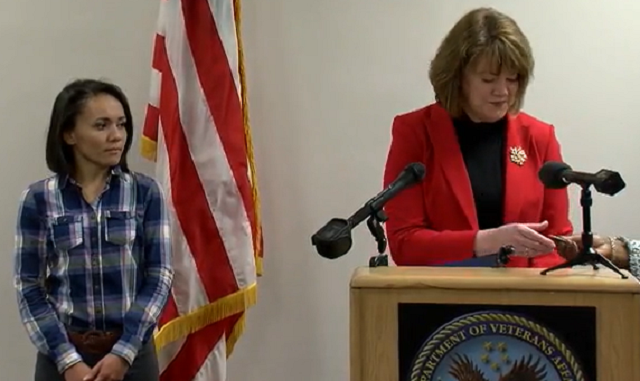 The woman who helped the wounded minister in the midst of bullets flying at Burnette Chapel Church of Christ September 24th is honored.

Minerva Rosa-Gonzalez received several awards and recognitions today (Monday) during a special ceremony at the Nashville VA Hospital, where she works. She received local, state and national recognition for rendering first aid to Pastor Joey Spann, who was shot when a gunman opened fire in the church just over the Rutherford County line in Antioch.

Rosa-Gonzalez says her only thought while this was going on was how she could help:

She is a nurse in the blood bank at the VA Hospital.

As for all of the attention she's getting -- Rosa-Gonzolez says she's very humbled:

Rosa-Gonzolez says she really doesn't feel like a hero. She adds she just did "what I was supposed to do." She's being credited as saving the minister's life. The member of the church kept pressure on his wounds until paramedic arrived.

Emmanuel Samson, is accused in the fatal shooting of Melanie Smith, which also left multiple people wounded. He was a graduate of Smyrna High School and also graduated from Motlow State Community College there.