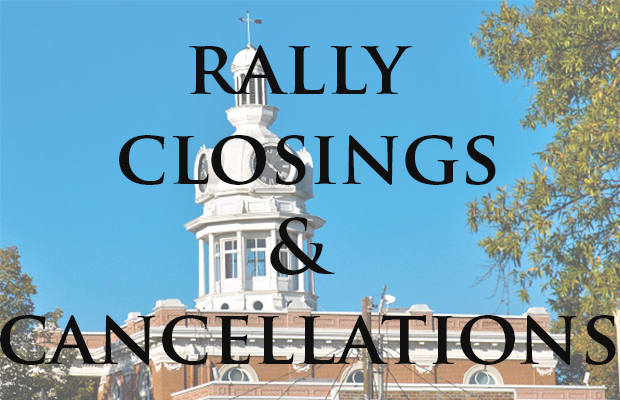 Several big events during the upcoming busy weekend will be canceled due to the White Lives Matter rally and expected counter protest on the Murfreesboro square.

MTSU has canceled the annual high school band competition "Contest of Champions," held each year at Floyd Stadium. In addition, the university will postpone the Expanding Your Horizons science event. President Sidney McPhee says the decision was made after consulting officials and they felt it was wise to cancel or postpone to "reduce traffic to the surrounding area Saturday and these decisions will allow our police and other security personnel to be available elsewhere on campus if needed."

Murfreesboro Parks and Recreation announced the annual Harvest Days at Cannonsburgh Pioneer Village has been canceled "due to anticipated activities in close proximity."

Oaklands Mansion has canceled events for the weekend. On their Facebook page, the historic site noted the decision was made after consultation with law enforcement, city officials, and other agencies. In canceling "Flashlight Nights," Oaklands Mansion will take a 10-thousand dollar hit to funding for their educational program.

Main Street Murfreesboro had already canceled their final Saturday Market, which would have been October 28th. Last Saturday was the last of the season.

Businesses in the downtown Murfreesboro area are being advised by authorities to prepare as those in coastal areas prepare for a hurricane. Boarding up windows and doors are among the precautions they're being advised to take.

Downtown businesses have also been advised to close their doors. Terrie Page, Regional Vice President for the local Better Business Bureau says it has a big impact on their bottom line:

Page says there will be a time after the events this weekend can and should support the businesses that will have to shut their doors on Saturday:

Restaurants in downtown Murfreesboro like Puckett's, Jack Brown's, the Alley on Main, Marinas, Milano's II and City Cafe will not be open because of the rally.

Barber shops like Shave Barber Lounge on the square and Woodsviking Barbershop will be closed.

And downtown traditions like Shacklett's Photography, Big B Cleaners and Trendy Pieces will have to shutter their doors on the weekend.

In WGNS' spirit of shopping "LOCAL", the community is encouraged to pay special attention to the downtown businesses that have been impacted.