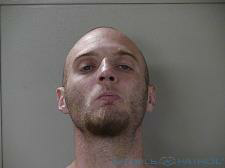 At first, the man who wrecked in front of Venture Point Apartments told police that his name was Philip Davis and that he was from Michigan. He later admitted that his real name was Philip Adkins.

Adkins told officers in Murfreesboro that while driving down Mercury Boulevard, his ABS brake indicator came on and his brakes automatically locked up. Apparently, Adkins wrecked into a ditch in front of his apartment complex on Mercury, which is why police were called.

Regardless of how the wreck occurred, police noted that Adkins smelled of alcohol. The culprit also admitted to drinking prior to driving. Therefore, he was charged with his third DUI. Two previous DUI convictions took place in 2012 and 2015, both in Rutherford County.

After being charged with DUI number three, driving on a revoked license for the third time and criminal impersonation, he told police that he routinely takes Xanax and drinks every day. He also talked about using Oxycodone and Percocet, according to his arrest report. Adkins was also served two warrants for violating his probation.

As of Monday (7/11/16) night at 9, Adkins was still behind bars at the Rutherford County Adult Detention Center.