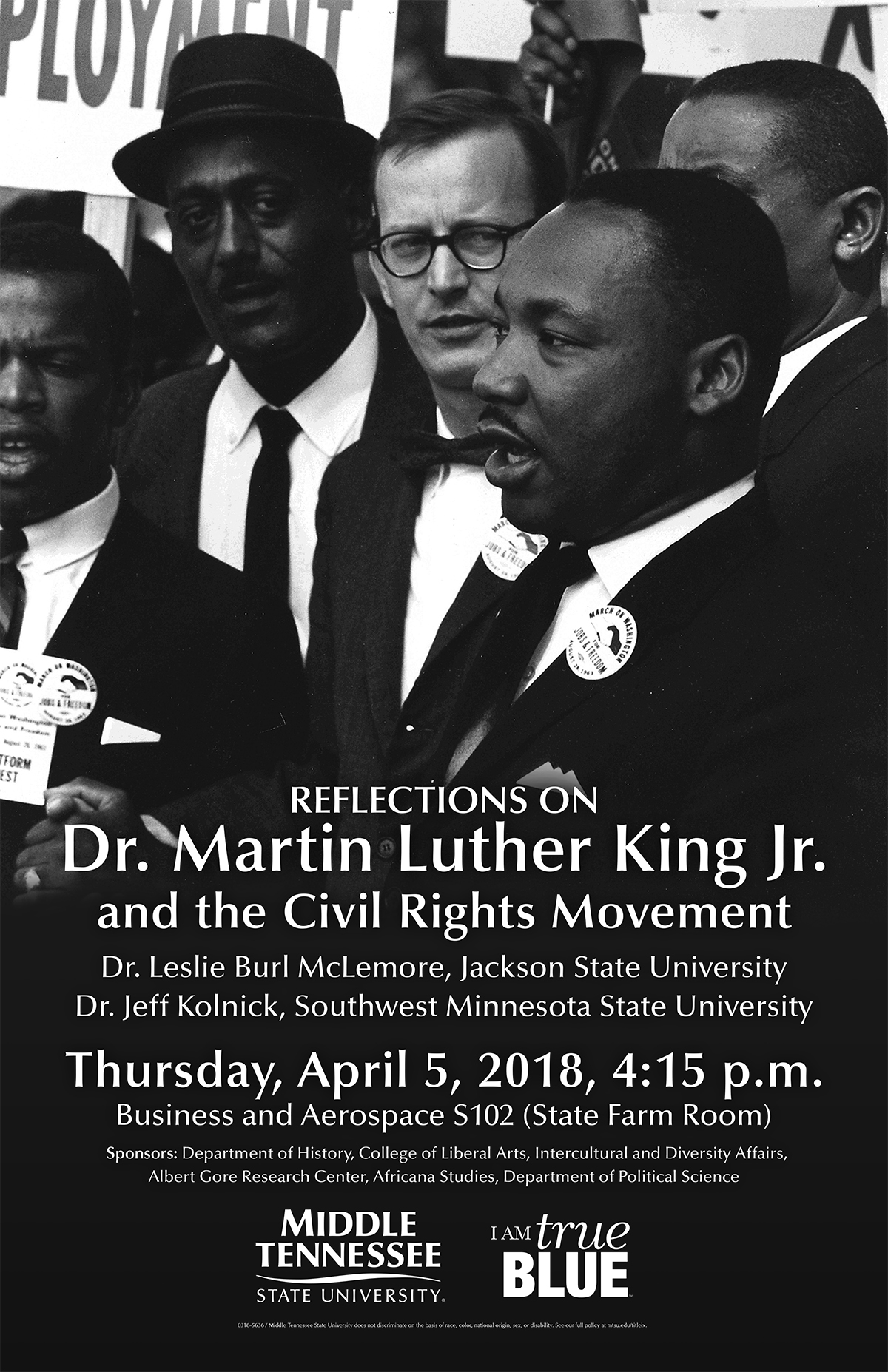 A civil rights activist, educator and political leader from Mississippi and a Minnesota colleague helping to ensure those activists' place in history will visit MTSU this Thursday, April 5, to discuss Dr. Martin Luther King Jr. and social justice in America.

Leslie Burl McLemore, the founding president of the NAACP chapter at Rust College in Holly Springs, Mississippi, as a young man and now a professor emeritus of political science at Jackson State University, will be joined by Jeff Kolnick of the Department of History at Southwest Minnesota State University to speak on"Reflections on Dr. Martin Luther King Jr. and the Civil Rights Movement" at 4:15 p.m. Thursday in the State Farm Lecture Hall, Room S-102, in MTSU's Business and Aerospace Building.

The discussion, which comes the day after the 50th anniversary of King's death in Memphis, is free and open to the public.

"It is a great honor to host leading educators in the field of African-American history and politics, one of whom is a distinguished veteran of the civil rights struggle," said MTSU history department chair Kevin Leonard. "MTSU students and community members will undoubtedly benefit from their deep insight into the civil rights movement."

McLemore became involved in civil rights almost as soon as he began his freshman year at Rust College, participating in a fall 1960 boycott of a Holly Springs theater that banned black patrons from the downstairs seating area. He joined the Student Nonviolent Coordinating Committee in 1962, was elected vice chair of the Mississippi Freedom Democratic Party and was one of the MFDP's delegates to the Democratic National Convention in Atlantic City, New Jersey, in 1964.

He continued his activism and education, ultimately earning a doctorate in government from the University of Massachusetts Amherst and returning to Jackson State to teach. McLemore also became directly involved in local government, serving on the Jackson City Council from 1999 until 2009 and briefly as interim mayor of Jackson.

Kolnick, who also serves as chair of SMSU's Department of Social Science, co-founded the Fannie Lou Hamer National Institute on Citizenship and Democracy at Jackson State with McLemore to honor the Mississippi civil rights icon and share her work with the world. He and McLemore also are the co-authors, with John Dittmer, of "Freedom Summer: A Brief History with Documents."

This special lecture is sponsored by MTSU's Department of History, the College of Liberal Arts, Office of Intercultural and Diversity Affairs, the Albert Gore Research Center at MTSU, the MTSU Africana Studies Program and the Department of Political Science.