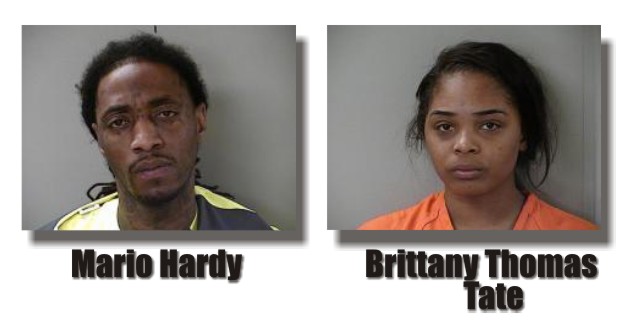 A baggie of white powder consistent with cocaine was found in the trash can during a Tennessee Probation and Parole visit to an East State Street address in Murfreesboro. Police and probation officers went to the home to check on 35 year old Mario Hardy this past Tuesday.

Once at the home, police came in contact with Hardy along with a 21 year old female by the name of Brittany Thomas Tate from Antioch. Officers found not only the alleged cocaine in the home that Hardy lives in, but also a marijuana blunt in the car belonging to him.

Police then turned their attention to Ms. Tate and when they asked to search her car, she said no. That was when a K-9 officer alerted to the driver's side door. A probable cause search was quickly conducted and over $2,000 in cash was found in a Crown Royal bag that was in the center console of Tate's vehicle. As the search continued, police found a bag of cocaine and a second bag of marijuana. A digital scale was also located in the car belonging to Tate.

Neither Tate or Hardy claimed ownership of the cocaine and marijuana found, but both were arrested.

Making matters worse for the duo, the home and cars where the drugs were found was within "Drug Free Zone" due to the nearby location of Holloway High School, Patterson Park Community Center and the Mid Cumberland Day Care facility.