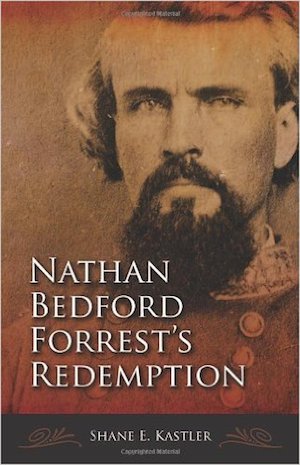 Nathan Bedford Forrest recently made the news again, but it is never for a good reason. Rep. Mike Sparks of Smyrna introduced a House Resolution (HR 97) to honor me, and shortly thereafter Forrest made the news. Some might wonder why I would write a book praising Forrest. My answer is, "I didn't." I wrote a book praising Jesus for having the ability to save any sinner, including Nathan Bedford Forrest. This is why the word "redemption" is used in my title.

I've been called a "Forrest apologist" by many. But far from defending his sins (which is what an apologist might do), I wrote openly about Forrest as a violent man, a racist, and "the chief of sinners." In fact, I wrote in my book that the bigger Forrest's sins were, the greater my thesis would be served. After all, I was writing about a big God who displays big grace to save big sinners. I deplore Forrest's pre-Civil War racism, but I praise God for his post-war salvation and for his public defense of black civil rights.

I do sympathize with those African-American lawmakers who feel they were tricked into voting for a resolution that honored Forrest. But what's even more disturbing is that they were tricked into crying out about a resolution that honored Forrest, when the actual resolution did nothing of the sort. The resolution says clearly that Forrest was a racist, an early leader in the KKK, and a slave trader; and he is not praised in the resolution for any of these things. The resolution merely mentions my work in telling the true story of how God changed his heart and saved this sinful man. The Associated Press headline that appeared in the New York Times, ABC News and scores of other outlets said, "Tennessee Lawmakers Unwittingly Vote to Honor Klan Leader." Yet this headline is extraordinarily misleading. The resolution honored me, not Forrest; and neither of us are racist. Forrest clearly was, but then God changed him. And isn't this what we want to happen with every racist? Would we not love to see every racist changed to such an extent that they actually speak out for racial equality? And if they did, would we insist on maligning them for past sins? Jesus once said, "He who is without sin may cast the first stone." (John 8:7) And none are without sin, except Jesus alone. In the end, only he can judge righteously.

Some media outlets love stirring up strife because it makes for good copy; and one of the most volatile venues in our country today is race relations. I fear the media threw out the bait with a misleading headline and many took the bait and gave the press what they wanted - disunity, anger, and strife. Tennessee should not be ashamed of passing a resolution "that honors Forrest" because they didn't pass a resolution that honors Forrest. They passed a resolution that honors me; a man who wrote of Forrest's many sins and the God who was powerful enough to change him and forgive him. My book and indeed my entire life's work has been devoted to proclaiming the good news of forgiven sin to all who come to Jesus Christ by faith. Forrest is not my hero. Jesus is. For this I am not ashamed.

In addition to Forrest, Rep. Sparks' original bill (which was shot down in committee) also honored Sampson Keeble, the first African-American lawmaker from Tennessee. It would seem very fitting to honor Keeble for his historic role in Tennessee's history; just as it would seem fitting to honor Forrest for his Christian conversion and subsequent, public calls for racial unity. Both men have something to teach us all. Keeble teaches us to persevere no matter who opposes us and no matter what their reason. Forrest teaches us that no matter how bad our sins were, there is always a gracious God standing ready to forgive the repentant; and our future is not fixed by what we've wrongly done in the past.

My hope is that one day the story of Forrest's Christian conversion and his defense of racial equality will be as well-known as his former sins of slave-trading and racism. This transformation was what fascinated me when I researched his life for my book. Ultimately, I didn't care how many battles he won, and I was unimpressed at how much money he made off of another person's work. I marveled at the grace of God that could change such a man and make him a trophy of grace. Today, the most well-known fact about Forrest is that Nathan Bedford Forrest was a racist. But I hope tomorrow's narrative will tell the true story of Nathan Bedford Forrest's Redemption.

Shane Kastler is an author and pastor of Heritage Baptist Church in Lake Charles, Louisiana, where he resides.