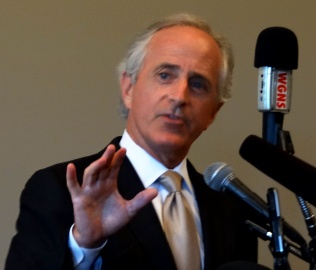 U.S. Senator Bob Corker (R-Tenn.), chairman of the Senate Foreign Relations Committee, praised the end of a "14-year drought" after President Obama signed the first State Department authorization bill into law since 2002. The legislation (S.1635) was unanimously approved by the Senate last Saturday after referral from the House of Representatives where lawmakers incorporated provisions from State Department authorization bills for fiscal years 2016 and 2017, which were authored by Corker and Senator Ben Cardin (D-Md.), ranking member of the committee.

"Yesterday, the president signed our State Department authorization bill into law, ending a 14-year drought," said Corker. "Restoring Congress' rightful role in the conduct of U.S. engagement overseas has been a top priority of mine as chairman. I thank Senator Cardin for his partnership and appreciate the bipartisan cooperation and contributions of my committee colleagues and our counterparts in the House in renewing this important oversight process on behalf of American taxpayers. Among other provisions, this legislation will enhance the security of our embassies abroad, improve personnel and organizational practices of the State Department, and demand much needed oversight and accountability of U.N. peacekeeping missions to end horrific cases of sexual abuse and exploitation. Going forward, I am hopeful we can build even further on this important progress to ensure State Department funding is used in the most responsible manner to advance American interests."