DUI III After Accident in the area of Breckenridge Subdivision 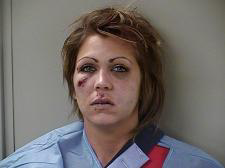 A woman who struck a tree and a mailbox in the area of Breckenridge Subdivision in Murfreesboro was charged with DUI number three. Witnesses who saw the 11 PM accident occur on Tuesday told police that Ashley Nicole Gordon swerved prior to running off the roadway.

Police met with Gordon at St. Thomas Rutherford Hospital which is where she was transported after the single vehicle crash. A warrant was obtained for her blood while she was in the hospital to check the alcohol content level that was in her blood at the time of the accident.

When officers did an inventory of her car prior to it being towed from the scene, they found a single Adderall pill along with an open container of alcohol.

After being released from St. Thomas Rutherford, Gordon was transported to the local jail. She later made bond at about 6:00 Wednesday morning.

Gordon will appear in court this September.