Duo accused of stealing a $287,000 RV from Christiana, a Jeep in Murfreesboro and more 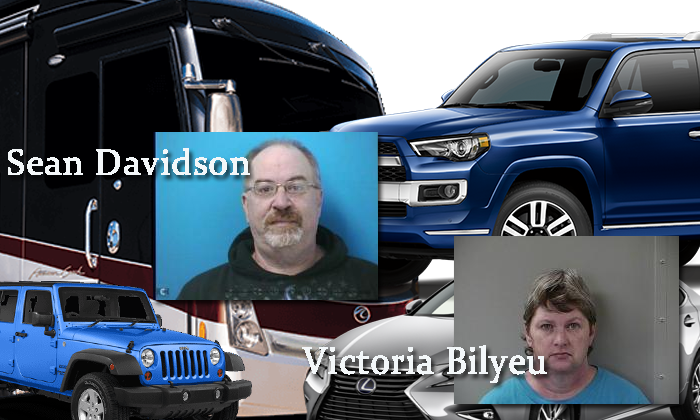 A couple has been accused of stealing everything from a 2015 Jeep Wrangler to a $287,000 motor home.

Murfreesboro Police responded to City Auto on Bridge Avenue near Red Lobster to follow up on an investigation into a stolen Jeep. It was there that detectives learned that Victoria Bilyeu and Sean Davidson allegedly wrote a check that they were not authorized to write to buy the Jeep Wrangler. Authorities then confirmed that the couple was accused of buying a $287,000 motor home at A & L RV Sales in Christiana. Both Bilyeu and Davidson reportedly wrote a check for the RV and then purchased an extended warranty that cost another $16,000.

As the investigation continued, it was learned that the duo were being held at the Williamson County Sheriff's Department after being arrested with a stolen 2015 Toyota 4 Runner. Murfreesboro Police went to the Sheriff's Office where they questioned the two.

The suspects allegedly admitted to Murfreesboro Detectives that they not only shopped in Murfreesboro for cars, trucks, SUV's and campers, but they also hit Nelson Mazda of Cool Springs, Town and Country Ford in Madison and Lexus of Nashville.

Multiple charges are pending against the two at this time. Court dates have not yet been set, but WGNS has confirmed that the two were transported from Williamson County to the Rutherford County Adult Detention Center.