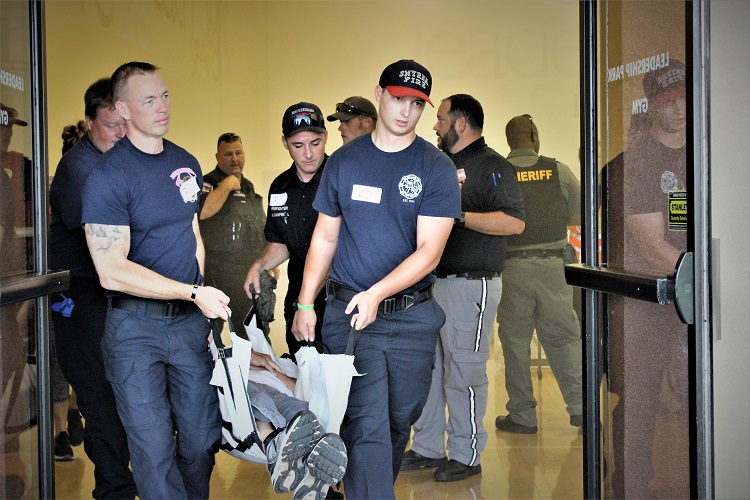 Teams of law enforcement officers, firefighters and paramedics work together to treat and protect a volunteer posing as a patient during active threat exercises.

More than 740 law enforcement officers, firefighters and paramedics working in Rutherford County were trained based on the rescue task force approach, said Sheriff's training Lt. Chris Kauffman, who coordinated the course. The unified training is unprecedented because all agencies are participating and learning together.

In past response to active shooters, law enforcement officers searched for the shooter while firefighters and paramedics staged outside until the scene was safe, resulting in victims dying while waiting for medical help.

With the rescue task force concept, law enforcement officers apply tourniquets to stop the bleeding, assess the victims' injuries and determine what medical resources are needed.

The officers accompany fire and medical personnel in to treat and evacuate victims before the scene is completely cleared of the active threat with the goal of improving saving victims' lives.

"We hope to accomplish a standardized response that allows us to utilize the rescue task force concept to save as many people as we can in the event of an active shooter," Kauffman said. "What that is creating is a standard of training throughout the county with law enforcement, fire and emergency medical services to provide an organized response to tragic and chaotic situations."

This training is so valuable and important to all agencies as it allows the emergency responders to proactive tactics and procedures in the event of a threat.

Emergency responders participated in several realistic scenarios while instructors grading them on their actions. Volunteers posed as victims to make the scenarios more authentic.

The 16-hour course is designed to improve integration between law enforcement, fire and emergency medical services in active shooting events. The class consists of eight hours in the classroom and eight hours of practical experience.

Kauffman appreciates the sheriff, chiefs and other department heads for supporting the training.

He thanked the volunteers from the Sheriff's Citizens Academy Alumni Association and MTSU students who are made up with wounds and a liquid resembling blood to portray victims.