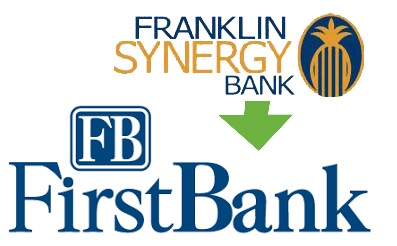 FirstBank's parent company FB Financial is acquiring Franklin Financial Network, the parent of Franklin Synergy Bank, for $611-million. This arrangement increases the presence of FirstBank in both Rutherford and Williamson Counties. It is forecast to close in the third quarter of this year.

When combined, the assets of the two banks will create Nashville's sixth largest financial institution, and number one in Williamson County.

Franklin Synergy Bank operates 15 branches in Nashville, Williamson and Rutherford Counties and has assets of $3.9-million. The bank was formed by Richard Herrington in 2007. Ironically, this merger comes about a year after CEO Herrington abruptly left Franklin Financial.

Nashville based FirstBank Financial became a publicly traded company in 2016. FirstBank was formed by Jim Ayers in 1984, and he later acquired Farmers State Bank. FirstBank has assets of $6.1-billion with 68 branches in Tennessee, Alabama and Georgia.

This acquisition will reportedly result in approximately 30 per cent savings, as well as cutting Franklin Synergy's risk by reducing health care loans as well as shared national credits by approximately $430-million.

Shareholders of Franklin Financial stock will receive .9650 common share of FirstBank's common stock, plus $2 cash for each share of Synergy stock that they own. The deal is estimated by FirstBank Financial to be about $39.44 per share.