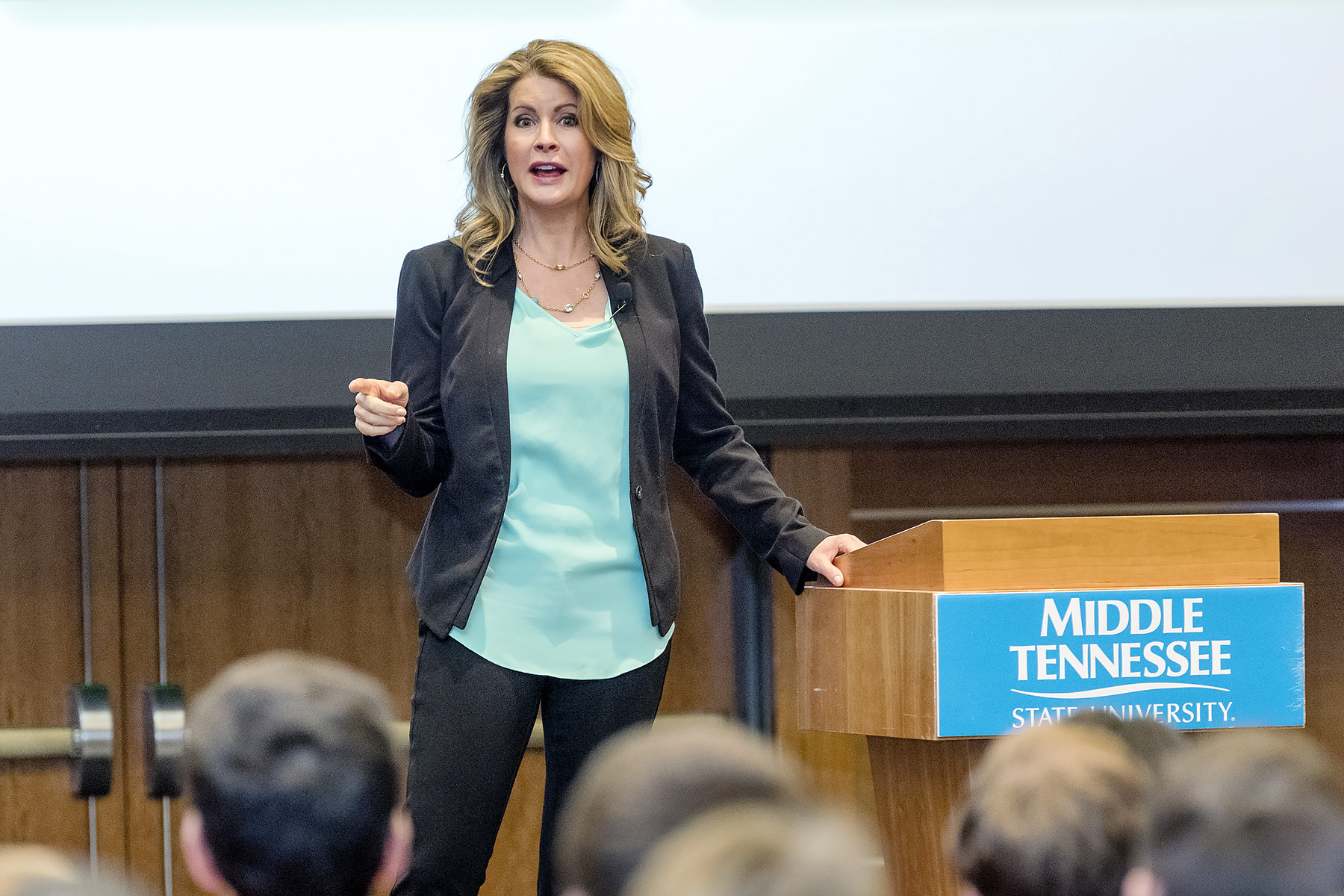 Gina "Gigi" Butler came to MTSU this week to give students the "unfiltered truth about success," while sharing the ups and downs she experienced on her way to founding the largest cupcake franchise in the country.

The founder and chief innovation officer for Gigi's Cupcakes gave the keynote address for this year's Global Entrepreneurship Week activities at MTSU, which included an Entrepreneurship Fair for area high school students Wednesday and wraps up with guest lectures on Thursday.

Butler told the crowd of about 150 students gathered Tuesday (Nov. 14) inside the Student Union Ballroom that at some point in life each of them would need to reinvent themselves. She recalled a "now what?" stage in her life when she read every self-help book she could find to broaden her thinking and perspective.

"It's painful and it's hard," said the Nashville entrepreneur. "But I expanded my mind and it changed me."

She went from starting a gourmet cupcake business almost a decade ago with $33 in her bank account to franchising a national brand that now has over 100 locations in 23 states and growing -- and 45 million cupcakes sold.

"If I can do this, then you can do what's in your heart," she said, noting that she got her entrepreneurial spirit from her father and her love of baking from her mother. "Success happens when you can successfully transition into something else."

MTSU's Jennings A. Jones College of Business again hosted the weeklong series of events and guest speakers to promote entrepreneurship, and it follows last month's Start It Up Conference featuring "Shark Tank" star Daymond John, who Butler mentioned in her opening remarks Tuesday.

John devotes several pages in his new book, "The Power of Broke," to Butler's success story and Butler has asked John to write the foreword to her book that is scheduled to come out next year. During his visit to Murfreesboro last month, John shared his story of going from driving cabs in New York to building the multimillion-dollar FUBU clothing brand.

"He wasn't an overnight success and neither was I," said Butler, who sold her franchise last year so that she could concentrate on being a "full-time mom" to her 6-year-old daughter.

Butler's journey to success included cleaning toilets for a living and giving up on dreams of being a country music singer. And it also meant being repeatedly turned down for loans and leases to open her cupcake business. "But they didn't see my vision," she said.

Butler shared the story of when her initial career vision, that of being a singer, vanished. She was running her successful cleaning company at the time and one day happened to be cleaning the home where a young, aspiring teenager named Taylor Swift lived. Once Butler heard that voice, she knew it was time for her to move on.

Along the way, she even appeared on the CBS reality program "Undercover Boss" in 2015. Other than the birth of her business and her now 6-year-old daughter, Butler said participating on the television program was the hardest thing she's ever done. One of the major lessons she learned from the experience was the importance of brand consistency and implementing brand standards.

"Branding to me is everything," she said, while pointing to the distinctive bags and boxes Gigi's uses to package its products.

Before taking audience questions, Butler gave students her recipe for success: take the leap (don't be afraid to fail); respect the power of hard work; be grateful and thankful; and always give.

Butler's story was "very inspiring" to Jones College senior finance major Junie Mendez of Knoxville, Tennessee, who has dreams of opening up her own coffee shop one day.

"I thought that it was great how she said stick to your education to make things easier on yourself, because that's very important," said Mendez, referring to Butler's answer to an audience question about what advice she would give students.

Butler dropped out of college to pursue her business, but didn't recommend MTSU students take that route today because a strong education can help young entrepreneurs avoid some of the pitfalls she experienced in building Gigi's.

"There's so much risk involved, and like she said, there's a lot of no's, but you have to push through that," said Mendez, who feels her finance background will be an important asset in trying to operate a new business.

Speaker Greg Lewis, CEO of the Nashville-based Tennessee Center for Family Business, will wrap events up with a public address from 1 to 2 p.m. Thursday, Nov. 16, in the Student Union Ballroom. Lewis, an expert in organizational management, team building and generational leadership transition, will discuss the ins and outs of running family-owned businesses.

The week's events are being held in conjunction with the annual Global Entrepreneurship Week, an international celebration of innovators and job creators held each November.