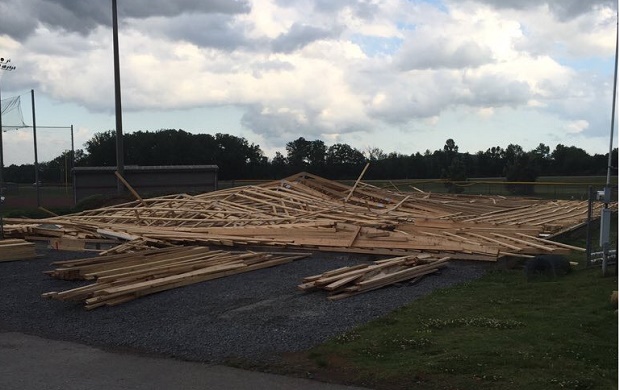 All of the framing to the under construction indoor facility at Eagleville School was blown down during the May 4th, 2016 storm.

High winds that accompanied storms here in Rutherford County left some structural damage and is even the suspected cause of death of a Milton man.

The storm, which blew through the area Wednesday afternoon during the five o'clock hour, is being attributed as the cause of the death of 64-year old Dwight Vinson. He was killed when a tree fell on him while riding an all terrain vehicle on Ruel McKnight Road in Milton. The tree trapped him. The National Weather Service reports winds of nearly 70 miles per hour with the storm.

Earlier, as the storm entered the county, it left behind damage at Eagleville School. Framing for an under construction indoor baseball and softball hitting facility was all blown down. Baseball coach Travis Holland says they'll rally the community to clean up the mess left behind and rebuild.

Other scattered reports of downed trees were reported across the county. In addition to the high winds, there was some hail that reportedly covered the ground in some locations.