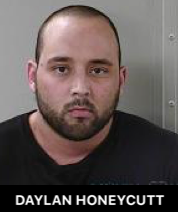 A 29-year old reality T.V. star is facing several charges after allegedly ransacking his girlfriend's home and forcing the victim to follow him.

Daylan Honeycutt, an actor in the T.V. show "I Love Kellie Pickler" and the 2000 movie "My Dog Skip," was arrested around 1:30 Thursday morning after allegedly kicking in the victim's garage door and destroying items in the Fortress Boulevard home. The victim reported to police that after this, she was forced to follow him and she couldn't get any of her belongings.

Around State Route 840, she exited and contacted police. Meanwhile, Honeycutt allegedly went back to the residence and gathered several more items. He was eventually stopped by Murfreesboro Police, with items found inside his vehicle belonging to the victim.

Honeycutt, who was listed on the official police report as being homeless, was arrested and charged with criminal contempt, domestic assault, vandalism, theft, aggravated burglary and false imprisonment. He was taken to the Rutherford County Adult Detention Center and is jailed on a 61-thousand, 500 dollar bond. Honeycutt will be in court August 11th to answer to the charges.