Rutherford County has a 3.9% Unemployment Rate 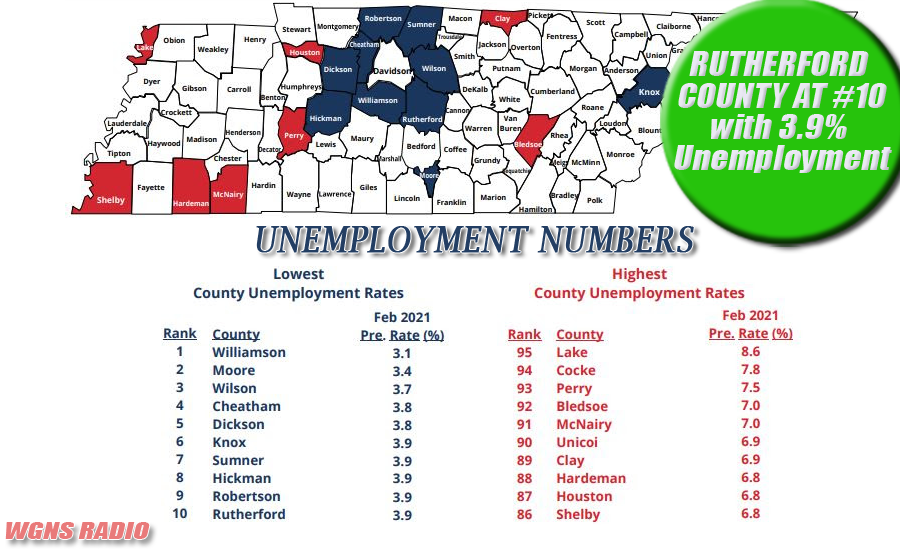 As a further indication the state of Tennessee’s economic turnaround continues, unemployment rates for February 2021 dropped in nearly every county, according to new data from the Department of Labor and Workforce Development.

Rutherford County is tied with four other counties on the state's top ten list of counties with the lowest unemployment rates. Currently... Rutherford, Knox, Sumner, Hickman and Robertson County all report a 3.9% unemployment rate. These counties fall in at numbers six through ten on the jobless data for Tennessee.

A total of ninety counties experienced lower unemployment during the month. Four counties recorded an increase in unemployment, while Smith County’s February rate remained unchanged from the previous month.

Unemployment rates are less than 5% in 39 of the state’s 95 counties and under 10% in the remaining 56 counties.

Williamson County continued to have the state’s lowest jobless rate in February at 3.1%, down 0.1 of a percentage point from January.

At 8.6%, Lake County had Tennessee’s highest unemployment rate in February, which was a 0.3 of a percentage point increase from January.

Statewide, unemployment dropped to 4.9% in February, down 0.2 of a percentage point from the previous month.

Unemployment also decreased across the United States during the month. The national February rate was 6.2%, a drop of 0.1 of a percentage point.

There are currently more than 215,000 job openings posted on Jobs4TN.gov. Tennesseans looking for work can find programs to help remove barriers to employment by visiting the virtual American Job Center at www.TNVirtualAJC.com.