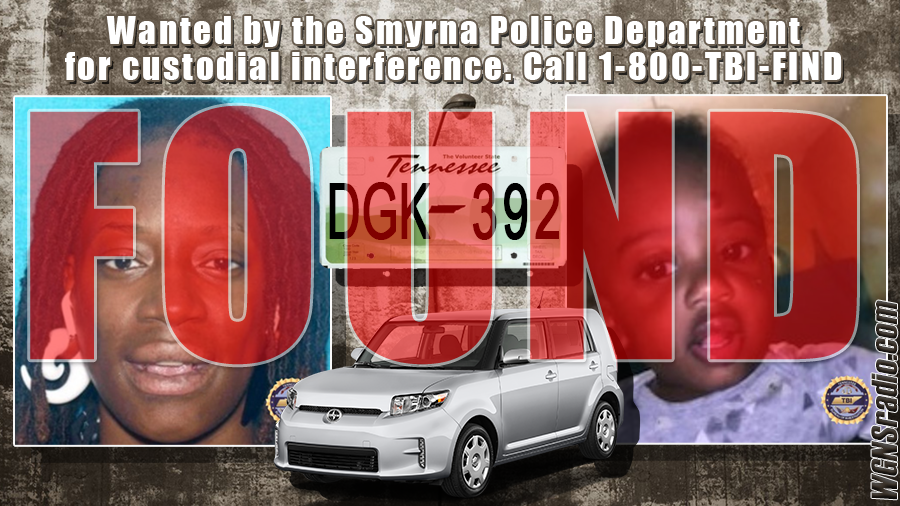 SMYRNA, Tennessee - UPDATE: Smyrna Police Department (SPD) can confirm that Nichelle Omega is safe and Nyx Omega is in custody.

SPD personnel were dispatched to the 400 block of Enon Springs Road West at 5:35pm, June 16, 2021.  The infant’s biological mother, Nyx Omega, was engaged in a supervised visit with the infant at the Smyrna Public Library.  Ms. Omega exited the building with the infant, hurried to a nearby parking lot, and left the area.

SPD issued an endangered child alert.  As the case unfolded, the Tennessee Bureau of Investigation (TBI) issued an AMBER Alert on behalf of SPD.

Earlier this morning, Metro Nashville Police Department (MNPD) spokesperson Don Aaron confirmed that east officers responded to the 400 block of Shelby Avenue near the James Cayce homes where the vehicle in the Amber Alert had been located.

When officers arrived, they located the mother and infant and were able to peacefully resolve the situation.  Nichelle Omega was transported to an area hospital for evaluation and has been reunited with her custodial relative.

Nyx Omega is in custody and SPD is charging her with custodial interference.

“Smyrna Police Department is grateful for the positive resolution to this incident,” shared SPD Chief Kevin Arnold.  “On behalf of the detectives involved, we would like to thank the TBI, MNPD East officers, and our community members who shared information to help safely reunite Nichelle with her family.”

(SMYRNA, TN)  The Smyrna Police Department and the TBI have issued an endangered child alert for Nichelle Omega.

Around 5:35PM Wednesday evening (6/16/2021), officers were dispatched to the 400 block of Enon Springs Road West.  The infant’s biological mother, Nyx Omega, was engaged in a visit with the infant at the Smyrna Public Library.

According to reports from Smyrna Police, Ms. Omega exited the building with the infant, hurried to a nearby parking lot, and left the area, allegedly with the child.  She was driving a 2008 silver Toyota Scion, license DGK392, with a mattress tied to the top.

Anyone with information is asked to contact Smyrna Police Department, 615-459-6644, or your local law enforcement agency.