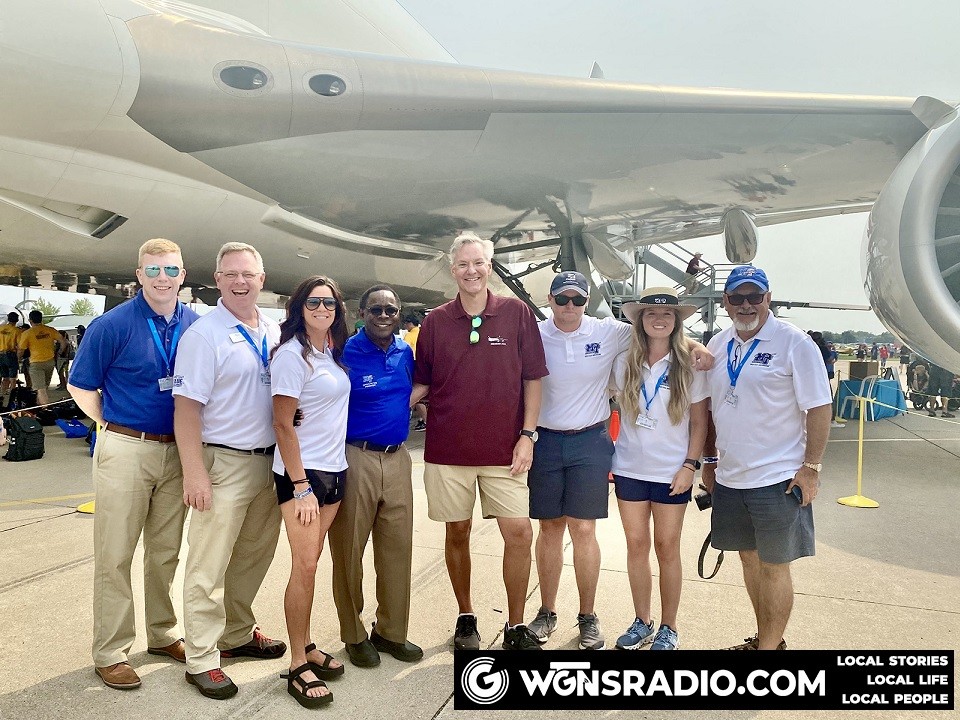 (Oshkosh, WI)  It's often hard to miss the accomplishments of Middle Tennessee State University. That was the case with the 2021 EAA AirVenture in Wisconsin. MTSU Aerospace graduate Mike Starnes brought a brand-new Boeing 747-8F to the world’s largest aviation celebration.

54-year old Starnes is a captain for United Parcel Service.

The long-range jet, with only about 30 flight hours on it before Starnes flew it from Louisville, Kentucky, to Oshkosh, turned a lot of heads at the Wisconsin air show. It is so new that it has yet to haul any cargo for UPS.  It is more than 63 feet tall and more than 250 feet long.

Starnes flew it from Louisville, Kentucky, to Oshkosh, turned a lot of heads at the Wisconsin air show. It is so new that it has yet to haul any cargo for UPS.

Starnes, a 1989 graduate of MTSU’s professional pilot program, hosted MTSU President Sidney A. McPhee and members of the MTSU Aerospace team at EAA for a tour of the jet’s cockpit and massive cargo hold.

MTSU President Sidney McPhee said, “We are so incredibly proud that one of our own, a graduate of MTSU’s Aerospace program, is behind the controls of this amazing aircraft."

McPhee’s visit with Starnes was the highlight of a busy week for MTSU at the premier aviation industry event. The president also met with the CEO of the university’s primary supplier of training aircraft, as well as recruiters for regional airlines and aviation officials from the Bahamas.

The UPS 747 was the centerpiece of the Boeing Plaza at EAA, an impressive showcase representing the company’s civilian and military aircraft. Starnes credited his alma mater for helping him climb to the rank of captain for UPS.

Starnes noted, “MTSU’s program is fantastic… and it is so much better than it has ever been. There are MTSU graduates flying for UPS, other airlines — and they are literally captains in the airlines.”

McPhee agreed, pointing out that “so many of our alumni are at EAA AirVenture — wearing True Blue and proudly pointing out how their aviation career began at our university.”

Inclement weather Wednesday afternoon in Oshkosh prompted EAA to close early, which meant MTSU’s midweek alumni barbecue at its booth was canceled. But alumni continued to drop by the MTSU booth on the next days to show support and appreciation for the university’s presence at EAA.

Starnes, who lives in Murfreesboro, but flies for UPS out of Anchorage, Alaska, is not the only MTSU alum in his family.

He also met with representatives from two regional airlines, Republic and Endeavor, about opportunities for MTSU Aerospace graduates, while also meeting officials with the Bahamas aviation ministry about educational partnerships.

Also at EAA, Provost Mark Byrnes and Greg Van Patten, interim dean of the College of Basic and Applied Sciences, met with officials with the Oshkosh Corp. on behalf of MTSU’s School of Concrete and Construction Management. The corporation, which makes concrete trucks and other heavy equipment, had a presence at EAA.

MTSU wraps up its time at EAA AirVenture on Sunday, Aug. 1.