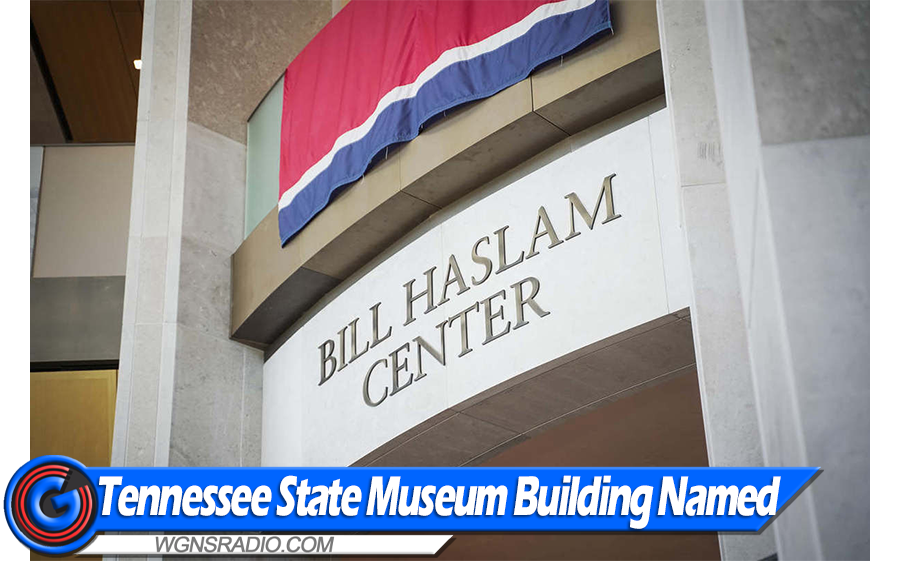 Three years after the Tennessee State Museum opened in its new location on the corner of Rosa L. Parks Blvd. and Jefferson Street in Nashville, the building housing it was dedicated this morning as the Bill Haslam Center. The ceremony in the Museum’s Grand Hall, complete with the unveiling of the 49th governor’s name across the second-floor rotunda, provided an opportunity to publicly celebrate the law signed and enacted on July 22, 2020 (Public Chapter 800 / Senate Bill No. 2301) and honor Haslam for his contribution to the preservation of the state’s history and expansion of the Museum in 2018 to its new location in a 137,000 sq. ft. state-of-the-art facility.

“It is an incredible honor to be here today,” said Governor Haslam after the unveiling. “States have complicated histories, and ours does, too. I happened to think we’re the best state in the Union, but we have warts and blemishes as well as our grand accomplishments. I love that this building will tell that story unflinchingly. I hope that the story of our state continues to reflect that it’s full of men and women who truly care. Thank you for electing me to this great honor. I’m personally very touched by the naming of this building.”

"Bill Haslam is not only one of us, he represents the best in us,” said Senator Alexander, who also spoke at the Museum’s Grand Reopening in 2018. “He could have continued to be a businessman or become a minister, but instead he chose the rough and tumble of elected public office – and he did it for the right reason. He understands that there is more to politics than politics, that it is hard to be elected mayor or governor and hard to stay there and that while you are there you should do your best to accomplish something good for the people you serve.  That's why it is so appropriate that Bill Haslam’s name will be front and center in perpetuity on this magnificent Tennessee State Museum."

“This museum honors the Tennesseans who came before us,” said Governor Lee. “It is the stories of the untold men and women who are everyday Tennesseans that have made this anything other than everyday place. This museum majestically reflects those people and that past and those circumstances and those issues, the painful ones, the joyful ones. It’s a remarkable tribute to our state and its people, and it’s remarkable that we have so many contributors to the history of Tennessee in one room to honor this man, who has made a significant contribution of his life in government to the best state in the country.”

The Tennessee State Museum was created by the Tennessee General Assembly in 1937 to consolidate World War I mementoes and other collections from the state, the Tennessee Historical Society and other groups. This museum was located in the lower level of the War Memorial Building until it was moved into the new James K. Polk Center in 1981. It remained there for more than 35 years until, in 2015, Haslam proposed a new $160 million home for the museum on the northwest corner of the Bicentennial Mall in Nashville. The Tennessee General Assembly appropriated $120 million to build the Museum, with the additional funding to complete the project raised through Haslam’s fundraising efforts in private contributions. The new Tennessee State Museum, which opened to the public on October 4, 2018, has since seen more than 350,000 visitors, including 55,698 students and teachers from 78 counties, engage with its exhibitions and programs, and more through its numerous digital and community outreach efforts. The Museum has hosted several smaller short-run and four major temporary exhibitions in that time, including Let’s Eat! Origins and Evolutions of Tennessee Food, a winner of an American Association of State and Local History (AASLH) award and Ratified! Tennessee Women and the Right to Vote, winner of the 2021 Past Presidents Award from the Tennessee Association of Museums (TAM). The Museum was re-accredited by the American Alliance of Museums (AAM), the highest national recognition signifying excellence afforded the nation’s museums, in early 2020.

The building that houses the Museum, now the Bill Haslam Center, has also won numerous awards, including the Excellence in Development Award from the Nashville Chapter of the Urban Land Institute (ULI) in 2020.

“It is only fitting that we come together today to recognize Governor Bill Haslam in the naming of this building,” said Howell. “We would not have this new home for the Tennessee State Museum without his support, leadership and vision, and his love of this state and its history.”
About Tennessee State Museum

The Tennessee State Museum, on the corner of Rosa L Parks Blvd. and Jefferson Street at Bicentennial Capitol Mall State Park, is home.to 13,000 years of Tennessee art and history. Through six permanent exhibitions titled Natural History, First Peoples, Forging a Nation, The Civil War and Reconstruction, Change and Challenge and Tennessee Transforms, the Museum takes visitors on a journey – through artifacts, films, interactive displays, events and educational and digital programing – from the state’s geological beginnings to the present day. Additional temporary exhibitions explore significant periods and individuals in history, along with art and cultural movements. The Museum is free and open to the public Tuesdays to Saturdays from 10 a.m. – 5 p.m.. and Sundays from 1 p.m. – 5 p.m. For more information on exhibitions and events, please visit tnmuseum.org.
ADVERTISEMENT
Tags: Bill Haslam Center Dedicated museum Nashville Tennessee State TN
Sections: News