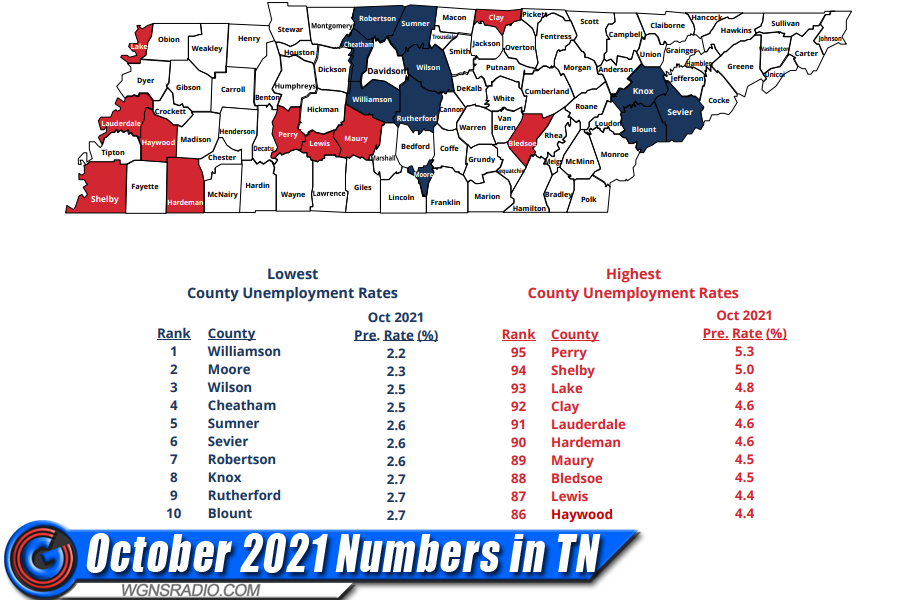 New data revealed the employment situation continued to improve for a majority of Tennessee’s counties in October 2021, according to the Department of Labor and Workforce Development.

Unemployment rates decreased in 65 counties during the month, while they remained the same in 20 counties, and increased in ten counties.

Scroll down to see all the unemployment figures for Rutherford County and see who has the lowest and highest rate in the state...

While Rutherford County failed to rank in the top three status of counties with the lowest unemployment figures for October of 2021, the county did rank in the top ten. Tying with Rutherford County were Knox and Blount Counties – all at numbers 8, 9 and 10 on the list for counties with the lowest unemployment figures.

Williamson County’s unemployment rate was the lowest of all the counties for the month. At 2.2%, its October rate dropped by 0.1 of a percentage point when compared to September. Moore County had the second-lowest rate at 2.3%, which was unchanged from the previous month.

While Perry County once again had Tennessee’s highest unemployment rate in October, the county’s jobless number showed significant improvement for the month. The latest statistics show its rate dropped 3.1 percentage points, from 8.4% to 5.3%. Shelby County had the second-highest rate, but it also showed month-to-month improvement, as it decreased from 5.3% to 5%.

Statewide unemployment in Tennessee was lower for the fifth consecutive month. The new seasonally adjusted rate of 4.2% was 0.2 of a percentage point less than September’s revised rate of 4.4%.

The employment situation also improved nationally. The United States unemployment rate for October was 4.6%, down 0.2 of a percentage point from the previous month.

Scroll down for more data and job information...

The state has complied all of October’s county unemployment data into a report which is available here.