Interns from MTSU Dive Into Politics and Lend a Helping Hand 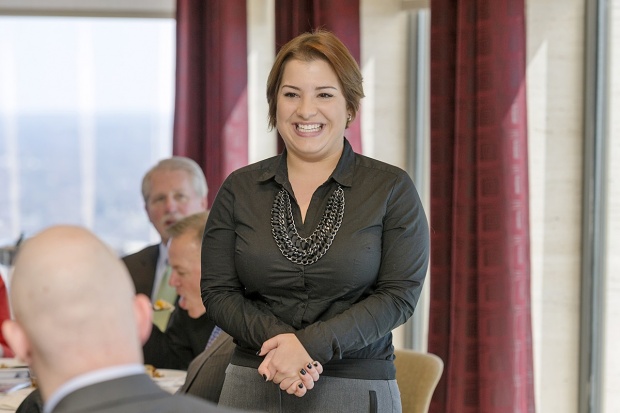 A friend told MTSU senior Timecia Terry that she would be well served by participating in the university’s legislative internship program, which gives students an inside look at the ins and outs of lawmaking in the state’s capital.

Wrapping up her internship with state Sen. Jim Tracy, R-Shelbyville, and approaching her May graduation, the political science major from Nashville is thrilled she heeded her friend’s advice.

“I’ve learned a lot. I’ve met a lot of great people,” said Terry, who had previously completed a judicial branch internship. “I tried to get as much experience as possible. … It’s very broad. There are a lot of different things you can learn.”

Terry was among 13 MTSU students who worked as legislative interns during the most recent session of the Tennessee General Assembly in Nashville. Twelve of them gathered recently on the 30th floor of the Tennessee Tower for a celebration luncheon in which university officials, lawmakers and alumni thanked them for their commitment.

“We send our students to Nashville for an entire legislative session to work for either a member or committee,” Byrnes said. “The idea is to give them hands-on experience and experiential learning to supplement what they learn in the classroom.”

Students are selected through a competitive process for the paid internships, and though many are political science majors, the positions are open to any major, Byrnes said. MTSU funds internships for students serving the Rutherford County legislative delegation. MTSU students can also vie for spots with other lawmakers and committees through the broader state legislative internship program, which has been around for four decades and is open to students at colleges and universities across the state.

Jake King, a senior political science major from Murfreesboro, interned with state Rep. Dawn White, R-Murfreesboro. King learned that the atmosphere surrounding a piece of legislation can change quickly within the halls of the Capitol.

“The main thing I’ve taken away from this internship is to expect the unexpected,” King said with a wry smile. “You go in thinking, ‘I know all about state government,’ and you have no idea.

“They’ll say one thing one day in committee, and then the next day it’s turned upside down and (lawmakers) send a bill back into subcommittee. They’ll have to start over,” said King, who offered a bit of advice to future interns. “Always be on your toes and be willing to help wherever needed, and you’ll have the greatest experience, I promise.”

For the interns, “the vast majority say it’s the best thing they ever did in college,” Byrnes said. “Occasionally we’ll get one that says, ‘Ooh. Politics is not for me.’ But to me that’s a valid response; they’ve still learned something.”

President Sidney A. McPhee lauded the program for matching the students’ classroom instruction with the real-world application of those theories in the General Assembly.

“What they learn during the internships, you can’t teach that in the classroom,” McPhee said. “Many of the alums who’ve gone through this program have gone on to take important positions within government and private industry.”

McPhee offered his congratulations directly to the students during the luncheon, calling them among “the best and brightest that our university has to offer.”

“As I talk to the legislators … they say incredible things about the quality of the work that you do, your dedication and your commitment to excellence. You represent the best of the best at our university.”

State Sen. Bill Ketron, R-Murfreesboro, was so impressed with intern Sara Mejia-Gomez that he involved her in the research for his proposal to study the feasibility of a monorail from Murfreesboro to Nashville.

“The quality of the students that I get in my office is simply amazing,” said Ketron, who added that he plans to hire Mejia-Gomez in his private business in Murfreesboro after she graduates in May. “It’s such a great program.”

Mejia-Gomez, a senior international relations major from Brentwood, Tenn., said working on the monorail study project, in which she was a lead researcher, has given her confidence that the experience will pay off later in her professional career.

“There are so many opportunities,” she said. “If you do a good job, you can show others that you are a force to be reckoned with. … You can make a name for yourself.”

Nuraldeen Brifkani, a junior English major with a minor in political science, interned in the office of state Rep. Charles Sargent, R-Franklin, chairman of the Finance, Ways and Means Committee in the House of Representatives.

“It’s one thing to study politics, to study law, to study policies in the classroom. It’s another thing to be right there when things are happening in real time,” said Brifkani, a Nashville resident. “It’s a very mind-opening experience. It’s a great way to make connections. … You really get to meet a plethora of people, from different backgrounds and offices.”

Donna Morgan, administrator of the state’s legislative internships, said the relationship with MTSU has greatly benefitted the program, which places roughly 100 interns a year.

“MTSU, with Dr. McPhee and Dean Byrne’s leadership, is a huge supporter of this program, sending us some of the best students from the state of Tennessee,” she said.