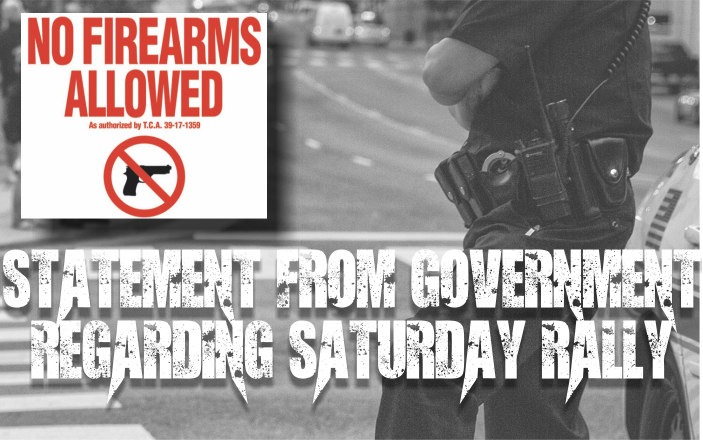 The City of Murfreesboro Police Department and the Rutherford County Sheriff's Office will partner with federal, state, and other local law enforcement agencies to ensure the constitutional rights and safety of citizens at an event, Saturday, October 28 in downtown Murfreesboro.

"Teams of officers will safeguard the area," Sheriff Mike Fitzhugh and Murfreesboro Police Interim Chief Michael Bowen said in a joint statement. "We ask everyone to maintain lawful behavior."

While the views of the League of the South are not from this community and do not represent those of the City and County, the First Amendment provides a right to free speech and a right to peaceably assemble, and, thus, neither the City nor the County can legally prohibit the event. The City and County, however, have carefully planned various measures to preserve and promote public safety, before, during, and after the event.

Some in our community might feel compelled to witness the demonstrations, but in the interest of reducing tension and avoiding conflicts, the City of Murfreesboro and Rutherford County government strongly encourage community members to avoid the Public Square Oct. 28.

As the sixth fastest-growing mid-sized community in the nation and home to MTSU, the largest undergraduate university in Tennessee, the City and County are proud of the community we are building and the diversity of its residents.

"The City, County, and its partners are committed to both the Constitution and public safety," Fitzhugh and Bowen said. "Be assured, officers will take every step necessary to protect both. The slightest indication of disruption or violence will initiate immediate law enforcement action to uphold the rights of citizens and ensure their safety."

For safety reasons, officers will close the downtown Square to all vehicular and pedestrian traffic at 3 a.m. Saturday, Oct. 28.

"We understand the temporary street closures will inconvenience our residents and visitors," Fitzhugh and Bowen said. "We ask you to pre-plan alternate routes, expect some traffic delays and be patient."