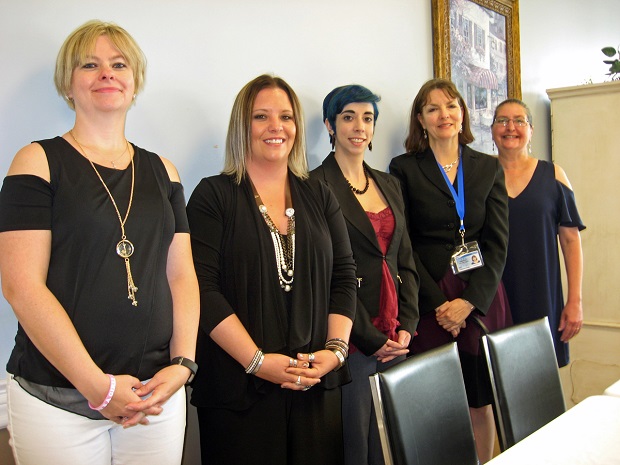 Three MTSU students with big dreams and big obstacles to overcome now have a big financial benefit to help them pursue their goals.

The June S. Anderson Scholarship Foundation gave stipends to Jennifer Griffith, Clelie Peacock and Tabatha Wadford at a May 10 luncheon at the Through the Grapevine restaurant, 630 Broadmor Road.in Murfreesboro.

Overwhelming medical issues hampered Griffith's college ambitions, as well as her work and home life. Ironically, though, the Murfreesboro senior's sickness led her to a new direction in life.

"I had a lot of chronic illnesses," said Griffith. "I had fibromyalgia, two sleeping disorders, chronic fatigue, vertigo and migraines, and all of that just kind of consumed me and took over my life."

Griffith had been out of work for four years when a trip to the YMCA inspired her to choose exercise science as a career. The positive impact of exercise was transformative.

"With proper maintenance, proper nutrition and proper exercise, I can maintain (my health) so much better now," said Griffith. "I'm able to get out of bed. I'm able to do things I couldn't do 10 years ago."

Griffith intends to work either in cardiopulmonary rehabilitation or physical therapy after she graduates.

For Peacock, the future is all about inclusiveness. The rising senior from Bellevue, Tennessee, said she chose an anthropology major because it "focuses on both the sciences and the humanities. It helps people understand the world around them and other humans, other cultures and how we all work together."

Peacock, who has been married only a few months, said her scholarship will enable her to quit her full-time job and become more involved in campus life. After graduation, she wants to go to graduate school and to travel.

"I plan to work in archaeology in Europe and help people understand their past and the past lives of those who weren't included in the written record--you know, just the everyday kind of people who didn't get a chance to be represented in history," said Peacock.

Due to its veteran-friendly environment, Wadford found a home at MTSU following a stint in the United States Army. Wadford served from 2004 to 2011 before becoming a civilian intelligence analyst for the U.S. departments of State and Defense in Iraq and Afghanistan.

Wadford, a senior from Estill Springs, Tennessee, also chose anthropology for her major, but after so many years abroad, she plans to work closer to home.

"I'm focusing on southeastern archaeology and the Native American peoples of the area," said Wadford. "I hope that I can use that whether through one of the Tennessee state archaeological services or one of the museums."

The June S. Anderson Foundation Scholarship awards full tuition scholarships to full-time MTSU undergraduate women age 23 or older and who are preparing for careers in nontraditional fields for women.

Each applicant must have a minimum cumulative GPA of 2.0, must not be paying out-of-state tuition and must demonstrate financial need.