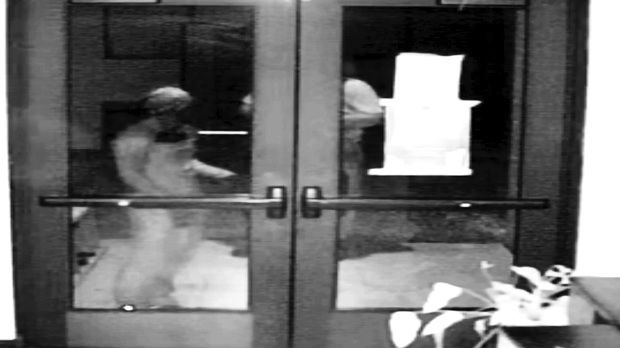 19-year old Charles Dwight Stout, III of Murfreesboro was indicted Wednesday (8/30/2017) by a federal grand jury and charged with obstruction of justice. The charge relates to the ongoing investigation into the vandalism of the Islamic Center of Murfreesboro on July 10, 2017.

According to the indictment, on July 10, 2017, Stout and another man vandalized the Islamic Center by placing bacon around an entrance and spray painting profane references to Allah on the exterior of the building. Islam prohibits the consumption of pork.

Both men wore masks during the crime to conceal their identities, including a World-War-II-era Nazi gas mask. Surveillance video allegedly shows Stout using a cell phone to take photos during the vandalism.

Acting U.S. Attorney Jack Smith said, "The tragic events in Charlottesville, Virginia remind us of the devastating impact that acts of hate have on our communities and our neighbors. When we are confronted with acts of hate it is incumbent upon every American to speak loudly and clearly that we will not tolerate such actions in America. Our reaction to such acts of hate speaks to who we are as individuals and as a society. Where those actions constitute federal crimes it is incumbent on federal authorities to vigorously investigate and prosecute the perpetrators of such heinous acts."

If convicted, Stout faces up to 20 years in prison. An indictment is merely an accusation. The defendant is presumed innocent unless and until proven guilty in a court of law.

Smith continued, "Our office will utilize all available means to protect the freedom to practice one's religion without fear, intimidation or harassment. We will prosecute to the fullest extent of the law those who, because of hate and ignorance, seek to interfere with that freedom. In desecrating this house of worship, the defendant sought to undermine the religious freedoms of members of the Islamic Center of Murfreesboro, the very freedoms that this country was founded upon. The FBI immediately began investigating these cowardly acts of intimidation against Muslims throughout Tennessee, however, the defendant sought to cover up his crimes by destroying evidence. Our investigation is continuing but this indictment is the first step toward holding him accountable for these despicable acts."

Members of the Islamic Center discovered the vandalism within hours of its occurrence, when they attended Morning Prayer and immediately reported it to law enforcement. Following the vandalism, Stout destroyed the clothing that he wore and permanently deleted the photographs that he took with his cell phone. The indictment alleges that Stout deleted photographic evidence.

Employees found vandals used green spray paint to deface two walls, a large panel on the east side of the building and concrete on the basketball court, said Detective Sgt. Dan Goodwin. Bacon was placed at the entrance of the school.

Stout appeared before a US Magistrate Friday (9/1/2017) afternoon.

The investigation by the Federal Bureau of Investigation and the Rutherford County Sheriff's Office is continuing. Assistant United States Attorneys Henry C. Leventis and Sara Beth Myers are prosecuting the case.